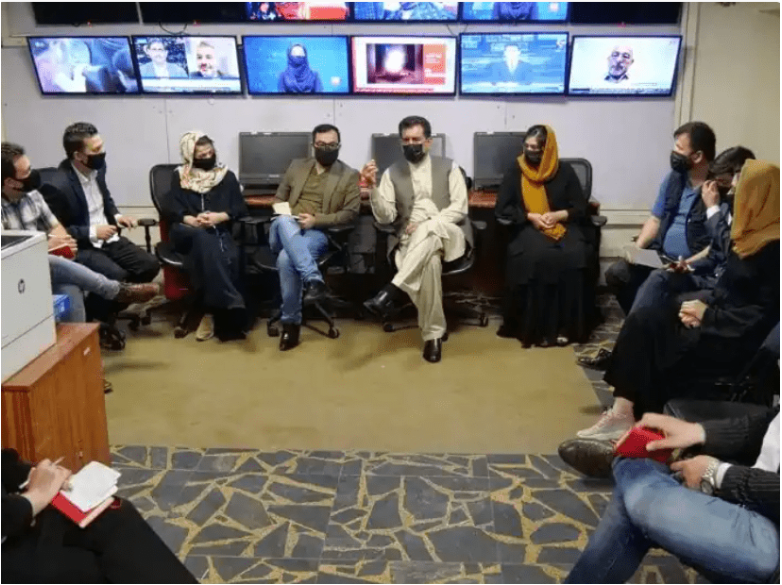 This month Afghanistan ’s supreme leader Hibatullah Akhundzada issued a diktat for women to cover up fully in public, including their faces, ideally with the traditional burqa.

The Ministry for Promotion of Virtue and Prevention of Vice ordered women television presenters to follow suit.

After defying the order a day earlier, presenters on Sunday (22) wore full hijabs and veils that left only their eyes on view across leading channels including TOLOnews, Ariana Television, Shamshad TV and 1TV.

“Today, they have imposed a mask on us, but we will continue our struggle using our voice,” Sonia Niazi, a presenter for TOLOnews, said after presenting a bulletin.

“I will never ever cry because of this order, but I will be the voice for other Afghan girls.” The diktat was an attempt to push women journalists to quit their jobs, Niazi said. “It is like stripping off your identity,” she added.

“Despite this we want to raise our voice … We will come to work until the Islamic Emirate removes us from public space or forces us to sit at home.”

Lima Spesaly, a presenter with news network 1TV, said it was difficult working under the Taliban government but she was ready for a fight.

“We will continue our struggle until our last breath,” Spesaly said, minutes before going on air.

TOLOnews director Khpolwak Sapai said the channel had been compelled to make its women presenters follow the order. “I was called on the telephone yesterday and was told in strict words to do it. So, it is not by choice but by force,” Sapai said.

Women presenters were previously only required to wear a headscarf. During the day, male journalists and employees at TOLOnews wore face masks at the channel’s offices in Kabul in solidarity with the women presenters.Other female employees continued to work with their faces visible.

Later in the evening, male presenters on both TOLOnews and 1TV went on air wearing black masks as a protest to the Taliban’s order against women presenters.

Government ‘happy’
Ministry spokesman Mohammad Akif Sadeq Mohajir said authorities appreciated that broadcasters had observed the dress code. “We are happy with the media channels that they implemented this responsibility in a good manner,” he said.