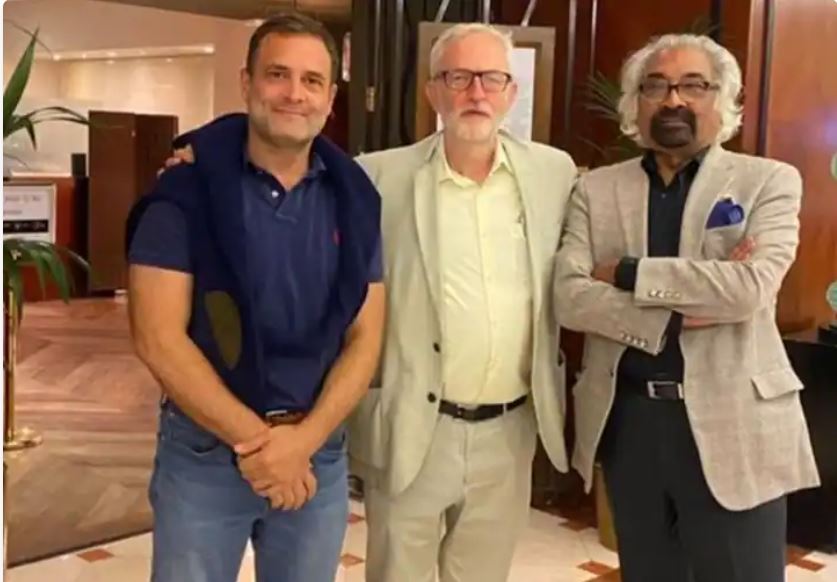 BJP’s Kapil Mishra slammed Gandhi and raised questions over the meaning of the meeting. Earlier, Corbyn was criticised for his ‘anti-semantic’ views and he has been a vocal supporter of Pakistan in the Jammu and Kashmir issue.

“Finally, may I also ask our media friends to identify the two men in the picture below and ask the same questions? Does it mean the PM has endorsed Jeremy Corbyn’s views on India?” Surjewala wrote. The image was taken during Modi’s maiden visit to the UK after becoming the prime minister.

Two years ago, Corbyn was ousted from the Labour party’s leadership for his ‘anti-semantic’ views. Under Corbyn, the Labour Party had also passed an emergency resolution advocating international intervention in Kashmir. The party was heavily criticised by sections of the Indian diaspora.

BJP leader Tom Vadakkan has also questioned why Gandhi has met a leader who has made several controversial comments on India in the past, Indian media reported.

“Corbyn has been known to be Anti-Indian. I think this is a group that is encouraging Rahul to speak what he speaks. I think these are the influencers influencing Rahul and more will be exposed in the future,” Vadakkan said.

“Whether it is meeting with anti-India elements like Jeremy Corbyn, who echo Pak propaganda on Kashmir, or signing an MoU with the Chinese and taking Chinese money into the Rajiv Gandhi Foundation, or meeting the Chinese during Doklam, Rahul stands steadfast with anti-India forces. Why oppose the country in an attempt to oppose PM Modi?”, Poonawalla tweeted.

Responding to these remarks, Surjewala attacked the ruling party and defended Gandhi in a series of tweets.

“If this is the criteria, our media friends should also debate: Why did PM take Nirav Modi to Davos and about their common photos? What about the video of the PM addressing Mehul Choksi as ‘Hamare Mehul Bhai’ at a public function? Why does the PM meet President Xi Jinping, when China has occupied our territory? Why did the PM go to Pak to meet the then PM, Nawaz Sharif? Will Govt promise it’ll never ever meet anyone having divergent views from us?” Surjewala asked.