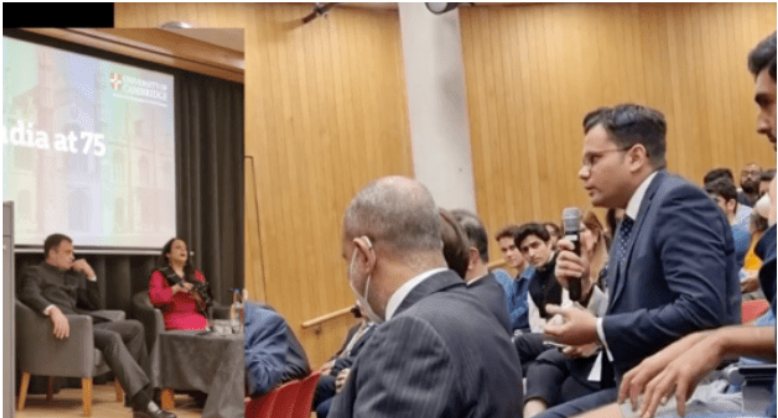 AS RAHUL GANDHI’S remarks on the current situation in India are creating ripples on social media, a civil servant confronted the Congress lawmaker in the UK, suggesting his idea of India could be “flawed and destructive”.

Siddhartha Verma, an Indian Railway Traffic Service officer and Commonwealth scholar in public policy at the University of Cambridge, posted his conservation with Gandhi on Twitter and the video garnered more than 600,000 views till Wednesday (25) evening.

Verma can be heard saying, “You quoted Article 1 of the Constitution saying India, that is Bharat, is a union of states as per the constitution. If you turn a page back and look at the preamble, it does mention that India is a nation. Bharat itself is one of the oldest surviving civilisations of the world and the term finds its origin in the Vedas and we have a very old civilisation.”

He went on, “even when Chanakya interacted with students in Taxila, he made it clear to them that they might belong to different janapadas (realms or republics) but ultimately they belong to the nation that is Bharat.”

“No, rashtra is the Sanskrit word for nation,” the officer said.

When the member of parliament from the south Indian state of Kerala said nation was a “western concept”, Verma said amid interruptions, “When I talk about nation, I don’t just talk politically because we have had these experiments across the world… Unless nations have a strong, social, cultural bonding, a constitution can’t make a nation,” the officer said.

Verma concluded his remark by asking Gandhi, “Don’t you think as a political leader your idea of India is not only flawed and incorrect but also destructive because it attempts to whitewash the history of (a) thousand years.”

But Gandhi said he did not think so.