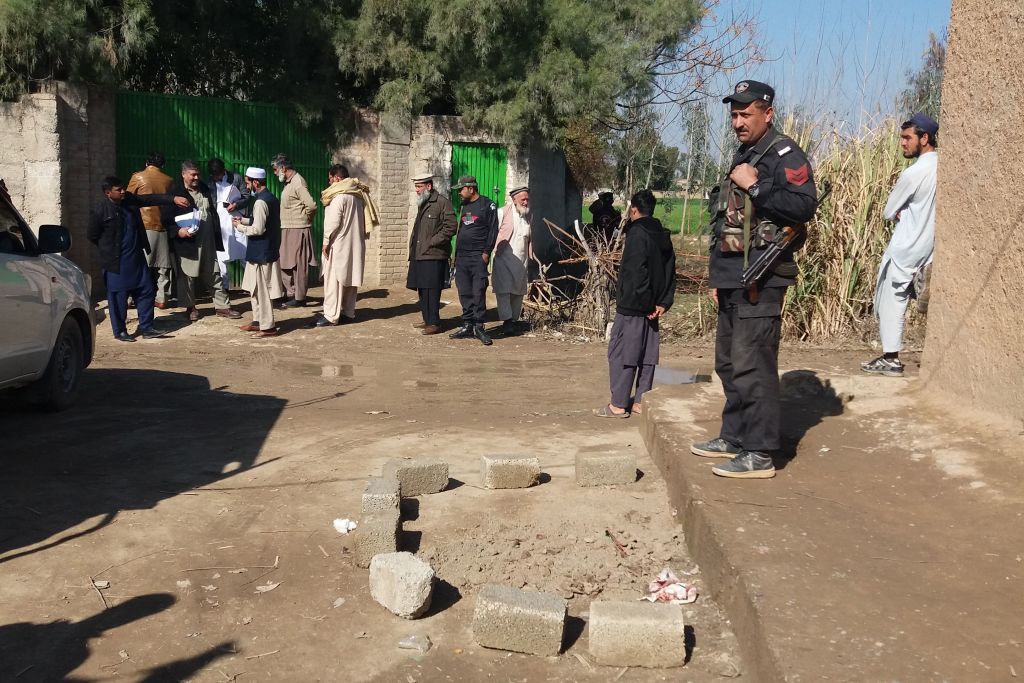 Police officials gather at the site of an attack by gunmen on a policeman guarding a polio vaccination team in Kohat, some 75 kms southwest of Peshawar on January 25, 2022. (Photo by AFP via Getty Images)

Watching over Hussain and her partner, a policeman unslings his rifle and eyes the horizon.

In concert they begin their task – going door-to-door on the outskirts of Mardan city, dripping bitter doses of rose-coloured medicine into infants’ mouths on the eve of a major milestone for the nation’s anti-polio drive.

The last infection of the wild poliovirus was recorded on January 27, 2021, according to officials, and Friday (28) marks the first time in Pakistan’s history that a year has passed with no new cases.

To formally eradicate the disease, a nation must be polio-free for three consecutive years – but even 12 months is a long time in a country where vaccination teams are in the crosshairs of a simmering insurgency.

Since the Taliban takeover of neighbouring Afghanistan, the Pakistan version of the movement has become emboldened and its fighters frequently target polio teams.

“Life or death is in God’s hands,” Hussain said, amid a patchwork of high-walled compounds in Khyber Pakhtunkhwa province.

“We have to come,” she said defiantly. “We can’t just turn back because it’s difficult.”

Nigeria officially eradicated wild polio in 2020, leaving Pakistan and Afghanistan as the only countries where the disease – which causes crippling paralysis – is still endemic.

Spread through faeces and saliva, the virus has historically thrived in the blurred borderlands between the South Asian nations, where state infrastructure is weak and the Tehreek-e-Taliban Pakistan (TTP) have carved out a home.

A separate group sharing common heritage with the Afghan Taliban, the TTP was founded in 2007 and once held sway over large swathes of the restive tribal tracts of Pakistan.

In 2014, it was largely ousted by an army offensive, its fighters retreating across the porous border with Afghanistan.

But last year, overall militant attacks surged by 56 per cent according to the Pakistan Institute for Conflict and Security Studies, reversing a six-year downward trend.

The largest number of assaults came in August, coinciding with the Taliban takeover of Kabul.

Pakistan’s newspapers are regularly peppered with stories of police slain as they guard polio teams – and just this week a constable was gunned down in Kohat – 80 kilometres (50 miles) southwest of Mardan.

Pakistani media has reported as many as 70 polio workers killed in militant attacks since 2012 – mostly in Khyber Pakhtunkhwa.

Still, a TTP spokesman said it “never attacked any polio workers”, and that security forces were their target.

“They will be targeted wherever they perform their duties,” he said.

Mardan deputy commissioner Habib Ullah Arif admits polio teams are “a very soft target”, but says the fight to eradicate the disease is entwined with the security threat.

Pakistan anti-polio drives have been running since 1994, with up to 260,000 vaccinators staging regular waves of regional inoculation campaigns.

But on the fringes of the country, the teams often face scepticism.

“In certain areas of Pakistan, it was considered as a Western conspiracy,” explained Shahzad Baig – head of the national polio eradication programme.

The theories ranged wildly: polio teams are spies, the vaccines cause infertility, or contain pig fat forbidden by Islam.

The spy theory gained currency with the killing of Osama bin Laden in 2011, whose hideaway in Abbottabad was revealed to the United States – unwittingly or otherwise – by a vaccine programme run by a Pakistani doctor.

The porous border with Afghanistan – a strategic crutch for the TTP – can also keep polio circulating.

“For the virus, Pakistan and Afghanistan were one country,” said Baig.

In Mardan, 10 teams – each comprising two women and an armed police guard – fan out across the city’s suburbs as morning turns to afternoon.

The teams chalk dates on the homes they visit and smear children’s fingers with indelible ink to mark those already inoculated.

On Monday (24), they delivered dozens more doses to add to the nationwide tally.

“We have the fear in mind, but we have to be active to serve our nation,” said polio worker Zeb-un-Nissa.

“We have to eradicate this disease.”

US ‘looks forward to working with Shehbaz Sharif’

Pakistan Army chief to retire in November ‘no matter what’