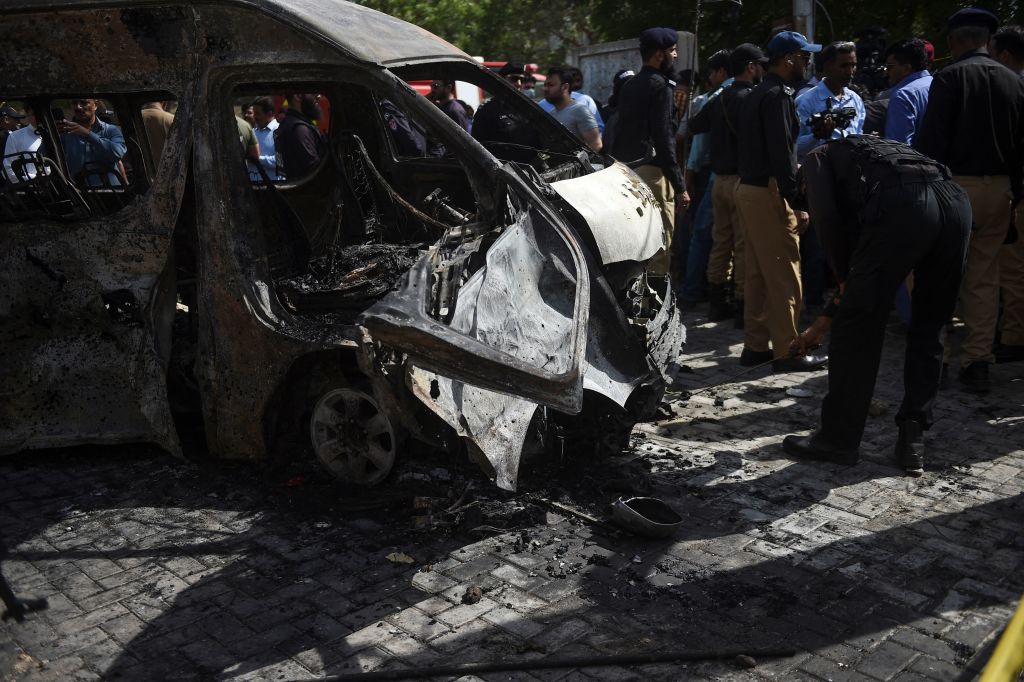 Police inspect a site around damaged vehicles following a suicide bombing near the Confucious Institute affiliated with the Karachi University, in Karachi on April 26, 2022. (Photo by RIZWAN TABASSUM/AFP via Getty Images)

A WOMAN suicide bomber from a Pakistan separatist group killed four people, including three Chinese nationals, in an attack on a minibus carrying staff from the Confucius Institute at Karachi University on Tuesday (26).

The Baloch Liberation Army – one of several groups fighting for independence in Pakistan’s biggest province – claimed responsibility, saying it was the first suicide attack by a woman assailant.

Chinese targets have regularly been attacked by separatists from Balochistan, where Beijing is involved in huge infrastructure projects as part of its Belt and Road Initiative.

Separatists have long harboured resentment against lucrative mining and energy projects in the region, saying locals do not see the benefits and are being pushed off their land.

Karachi police confirmed four people had died, including the minibus driver and three staff from the Confucius Institute, the cultural and educational programme that China operates at universities around the world.

CCTV footage broadcast by local channels showed a woman standing near the gate of the institute, inside the Karachi University grounds, as the minibus pulls up.

When it gets to within a metre she turns her back on it and detonates a bomb strapped to her body.

“I am deeply grieved on the loss of precious lives including of our Chinese friends in the heinous attack in Karachi today,” he tweeted.

Sharif only took over as the prime minister after Imran Khan was ousted by a no-confidence vote earlier this month, and tackling a resurgence in militancy will be one of his biggest challenges.

“I strongly condemn this cowardly act of terrorism,” Sharif said, adding “the perpetrators will surely be brought to justice”.

Tensions have flared in recent years in Balochistan following a massive influx of Chinese investment.

China is upgrading energy links and infrastructure as part of a $54 billion (£42.47 bn) programme known as the China-Pakistan Economic Corridor, with both nations wary of security threats to the projects.

In April 2021 a suicide bomb attack at a luxury hotel hosting the Chinese ambassador in Quetta, the provincial capital of Balochistan, killed four and wounded dozens.

The ambassador was unhurt.