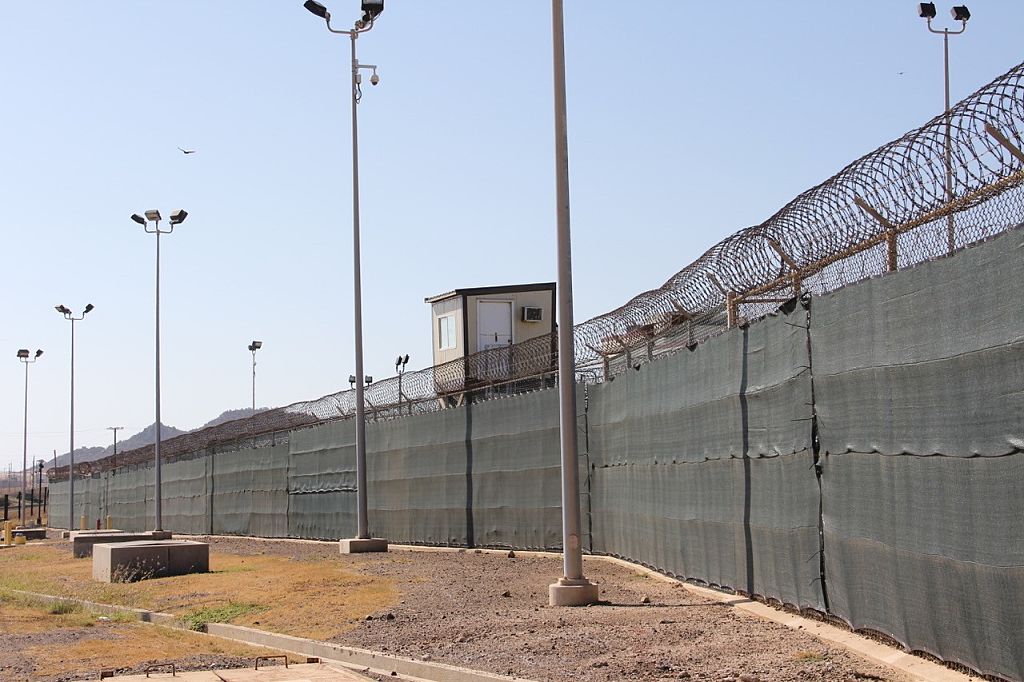 The US Military’s prison in Guantanamo Bay, Cuba. (Photo by THOMAS WATKINS/AFP via Getty Images)

THE trial of five men accused of participating in the September 11, 2001 Al-Qaeda plot to attack the United States has moved extremely slowly before the military commissions in Guantanamo Bay, Cuba since the original charges were announced in February 2008.

The case was withdrawn, and then refiled, and the first hearing took place in May 2012.

Since then, dozens of hearings have taken place, all in the pre-trial phase. After a 17-month halt because of the Covid-19 pandemic, the case is restarting on Tuesday (7) with a new judge, the eighth to preside.

The case, occurring in a highly secure courtroom on the US naval base in southeast Cuba, is mired in the defence’s effort to demonstrate that the government’s evidence is tainted by the torture that defendants underwent in CIA captivity.

The five, including two Pakistani nationals, are charged with conspiracy, terrorism, and the murder of 2,976 people in the attacks, charges which can bring the death penalty.

Khalid Sheikh Mohammed: Mohammed, dubbed “KSM”, is called the mastermind of 9/11. A Pakistani citizen raised in Kuwait, Mohammed, 56, is believed to have first proposed crashing jets in the United States to Al-Qaeda leader Osama bin Laden in 1996.

A graduate from a US university, he was working for the government of Qatar in the early 1990s when he began fashioning plots with his nephew Ramzi Yousef, who detonated a bomb in New York’s World Trade Center in 1993. In 1994, the two allegedly planned to blow up US-bound airliners from the Philippines. The first attempt failed, and Yousef was arrested in Pakistan and extradited to the US.

When bin Laden finally approved the 9/11 plot, Mohammed was believed to be put in charge. He was captured in Rawalpindi, Pakistan in March 2003 and taken by the CIA to black sites in Afghanistan and then Poland for interrogation. He was allegedly subjected to waterboarding 183 times over four weeks, as well as other harsh interrogation methods.

In September 2006, he was sent to Guantanamo. A year later, he told a closed-door hearing that he was responsible not only for the 9/11 attacks but also Al-Qaeda-linked bombings in Bali and Kenya, the failed 2001 “shoe-bomber” attempt to bring down a US airliner, and the murder of US journalist Daniel Pearl.

Ramzi bin al-Shibh: Al Shibh trained in an Al-Qaeda camp in Afghanistan with some 9/11 hijackers in 1999, and became part of the “Hamburg Cell” that included lead hijacker Mohammad Atta and two others. But the Yemeni, 49, failed to get a US visa to take part, and instead, he allegedly helped coordinate between the cell and Al-Qaeda.

He was captured in Karachi, Pakistan on September 11, 2002. Over the next four years, he was repeatedly moved between CIA black sites, undergoing repeated interrogations. He was transferred to Guantanamo in September 2006. His lawyers say he continues to suffer severely from torture, and that the government itself labels him psychotic.

Walid bin Attash: Attash, 43, is called a “senior lieutenant” in Al-Qaeda who allegedly helped Mohammed plan the 9/11 attacks as well as other plots. A Yemeni native, he travelled to Afghanistan and Tajikistan in the early 1990s to battle the Soviets and lost part of his right leg fighting in Afghanistan in 1996. In 1999, he led a close combat course in an Al-Qaeda training camp that included some hijackers. Ahead of 9/11, he took flights on US carriers across Southeast Asia to test airline security, and potentially to hijack and crash one of them. He also allegedly procured the explosives used in the October 2000 suicide bombing of the USS Cole missile destroyer which left 17 American sailors dead. He has a younger brother also in Guantanamo, who has not been charged or directly implicated in the 9/11 plot.

Ammar al-Baluchi or Ali Abdul Aziz Ali: A citizen of Pakistan originally from Kuwait, Baluchi is a nephew of Khalid Sheikh Mohammed. He allegedly prepared the hijackers, teaching them how to function in Western culture, and helped with travel plans and money transfers for the operation. He was captured in Rawalpindi, Pakistan in April 2003. He underwent interrogations in the hands of the CIA, and he remained in their custody for 40 months before being delivered to Guantanamo. His attorneys say he was repeatedly thrown against a wall in the interrogations, leaving him with significant, medically diagnosed brain damage.

Mustafa al-Hawsawi: A Saudi Arabian national, Hawsawi, 53, allegedly aided the 9/11 hijackers with travel arrangements and by handling money transfers for them, working together with Baluchi. Captured in Rawalpindi, Pakistan in March 2003, he underwent interrogations by the CIA and was then held in black sites until being sent to Guantanamo in September 2006. His attorneys say he suffered rectal damage due to the abusive techniques of his captors.