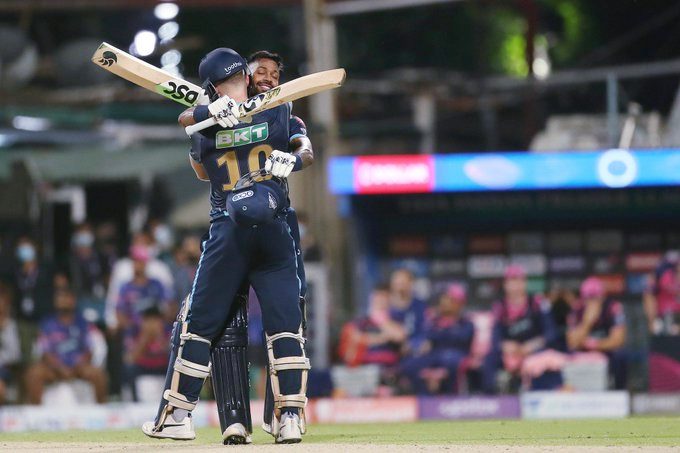 Pandya hadn’t been in great form ahead of IPL and his fitness was also a major concern. Some even questioned the decision to appoint him as captain despite his lack of leadership experience.

When asked about reports about his fitness, the 28-year-old said: “It’s people’s job to speak. What can I do sir? News sells on Hardik Pandya’s name. I am okay with it. I just laugh it off.”

He has scored 450 runs at an average of over 50 in this season. Pandya scored an unbeaten 40 off 27 balls in the successful chase of 189 against Rajasthan.

After the match, he hailed “match-winner” David Miller after the South African batsman led the team to a seven-wicket victory.

Chasing 189 for victory in the first qualifier, Gujarat rode an unbeaten 106-run fourth-wicket stand between Pandya (40) and Miller (68) to achieve the target with three balls to spare in Kolkata.

With 16 needed off the final over, the left-handed Miller smashed each of Prasidh Krishna’s first three balls for six to bring the house down at a full capacity Eden Gardens in the first qualifier.

Known as ‘Killer’ Miller for his big hitting, the left-hand batsman smashed three fours and five sixes in his 38-ball knock.

‘Miller is always a match-winner’

“A lot of people counted David Miller out but for us he was always a match-winner from the time we brought him in the auction,” Pandya said of the attacking batsman who has been key to Gujarat’s success in their debut season.

“What he did today, we always expected him to do that. But for us it was important to give him importance, love and clarity that what we expect of him and if he fails it’s okay, ‘it’s just a game’.”

Afghanistan spin wizard Rashid Khan set up the win with figures of 0-15 that kept Rajasthan to 188-6 despite Jos Buttler’s 56-ball 89.

Gujarat, one of two new teams alongside Lucknow Super Giants in the expanded 10-team IPL, now await their opponent for the title clash on Sunday (29) in their home ground Ahmedabad.

The second qualifier on Friday (27) will decide the other finalist.

Rajasthan, who ended second in the table topped by Gujarat, have another shot of making the finals when they meet the winner of Wednesday’s (25) eliminator between Lucknow and Royal Challengers Bangalore.

Virat Kohli on vacation mode on beach ahead of England tour