Inside an assassin’s mind: Why Godse killed Gandhi 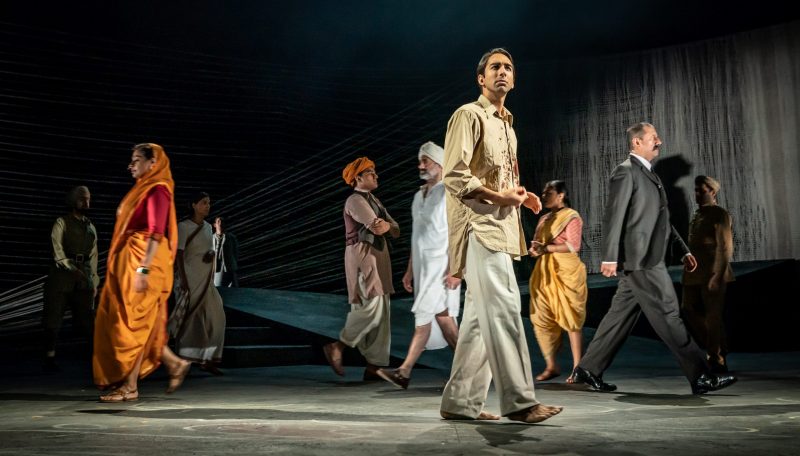 THE National Theatre’s new play, The Father and the Assassin, examines why Nathuram Godse, initially a supporter of Mohandas Karamchand Gandhi, turned against the Mahatma and shot him dead at a prayer meeting in New Delhi on January 30, 1948.

Eastern Eye readers will appreciate this is a multi-layered play, with dialogue that is raw and uncompromising.

It begins with Godse wearing a blood-soaked kurta and addressing the audience: “What are you staring at? Have you never seen a murderer up close before? Take a good look…Do I look evil? I’m not, no matter what you’ve heard. I am a genuine, concerned citizen of the world who once wanted nothing more than to be a free man.….I guarantee, once you know my story, once you truly understand me, I know you’ll celebrate me. Maybe even build statues in my honour.”

Godse is disparaging about “that fawning Attenborough film! With Sir Ben Kingsley”, and adds: “It’s about time you know who I am, for I too am etched in India’s history.”

It was a very dark period in India’s history, for Godse’s assassination traumatised the entire country. Jawaharlal Nehru, independent India’s first prime minister, addressed a devastated nation: “The light has gone out of our lives and there is darkness everywhere….The light has gone out, I said, and yet I was wrong. For the light that shone in this country was no ordinary light. The light that has illumined this country for these many years will illumine this country for many more years, and a thousand years later, that light will be seen in this country and the world will see it and it will give solace to innumerable hearts. For that light represented something more than the immediate past, it represented the living, the eternal truths, reminding us of the right path, drawing us from error, taking this ancient country to freedom.”

The Father and the Assassin is not only about the past, for British Asians will recognise that the playwright Anupama Chandrasekhar is making a comment on the rise of the Hindutva movement in contemporary India.

And at times, the dialogue may resonate with the far right in Britain.

Chandrasekhar, who is based in Chennai, looks at Gandhi’s assassination through Godse’s eyes. She was the National’s first international playwright-in-residence. Her plays have been staged in London – Free Outgoing and Disconnect, both of which premiered at the Royal Court in London, and When the Crows Visit, which opened at the Kiln.

She sets out the structure of her play in the programme notes: “One strand of the play begins with the assassination of Gandhi….and ends with the deaths of Godse and Apte.

“A second strand of the story traces Godse’s life and Gandhi’s political impact from 1917 to the fateful day in 1948. “A third strand of time is now.”

She says: “Not much is known about Gandhi’s assassin, Nathuram Godse. Here’s what we do know – he was born in 1910, to orthodox Marathi Brahmin parents in West India. Godse was initially a follower of Gandhi and his inclusive, non-violent struggle for Indian independence, but later turned into a radical Hindu nationalist.

“He started a paper with Narayan Apte, with whom he’d plot and eventually succeed in the assassination of Gandhi. Godse and Apte were found guilty of the crime and hanged to death in 1949.”

She reveals: “I worked on The Father and the Assassin for over five years..In the end, I did not want the play to be a history lesson.”

The conventional wisdom is that Godse targeted Gandhi for allegedly being too sympathetic to India’s Muslims.

“I am Nathuram Vinayak Godse,” Godse tells the audience. “Journalist. Patriot. I killed Mohandas Gandhi and I have no regrets.”

He claims: “It was my plan, my execution, all mine – and only mine.”

But is that really true?

The play states that Godse and Apte were turned into extremists by Vinayak Damodar Savarkar, a stern, unbending ideologue who was implicated in Gandhi’s assassination but “exonerated due to lack of evidence”.

Chandrasekhar makes the point that “Godse would see Savarkar as his mentor until the very end”.

The two and-a-half hour play, which is directed by Indhu Rubasingham, received a standing ovation from a packed audience in the 1,150-seat Olivier Theatre on press night last Thursday (19) – and deservedly so.

Godse is played by Shubham Saraf, who was cast as the charming Firoz Ali Khan in Mira Nair’s BBC adaptation of A Suitable Boy. His character is on stage throughout the play – and seeks to charm the audience into siding with him.

Paul Bazely plays Gandhi, whose role is almost a prop to that of Godse. Sagar Arya impresses as Savarkar, the man who rejects notions of both secularism and ahimsa (non-violence).

The idea that Muslims are outsiders is first put into Godse’s head by Savarkar: “Yes, Godse, Muslims! Who invaded us … and ruled us before the British. They live today on our land as if they’re not Indian…..That Godse, Apte…..is the crux of the problem. Their loyalty does not lie with their motherland, which is India, but with their holy land in another part of the world. How can you expect lasting peace between Hindus and Muslims with such an attitude? How can you expect any concession from the British when there are enemies within us?”

As Gandhi is seen emerging from the shadows, Savarkar drives home his vision of a Hindu India diametrically opposed to that of Gandhi: “The Germans have it right. The only key to nation building is homogeneity. One culture, one nation. Minority cultures must embrace the practices of the majority culture. I am an atheist but I’m a Hindu too. Hindu-ness is a way of life, our way of life, and it must become everyone’s. Our goal shouldn’t just be an independent India but an independent Hindu India.”

Godse turns to the audience: “That was the first time I heard of a Hindu nation.” When he is held in custody, a prison officer asks him: “Did you kill Gandhiji to please Savarkar?”

In an earlier scene, past and present again appear to merge when Godse, who had once worked as a tailor’s apprentice, accosts a Muslim customer: “Jai Shri Ram! Come on, say it….” This has become a kind of war cry with some militant Hindu groups in contemporary India.

Gosde takes a long-term view and believes that his time will come: “Revolutions take time to gestate. Weeks, years. Perhaps even decades. Right?”

The play ends with an imaginary encounter between Godse and Gandhi in the afterlife, with the former making his final assertion: “It’s better to be a Godse than a Gandhi.”

There are snatches of dialogue that might strike a chord with far-right groups in Britain. Godse exhorts the audience: “We have to be ready. No, you have to be ready….Know who your enemies are. They are hidden among you. Your neighbours, your colleagues….They don’t speak your language, they don’t share your values, they don’t look like you…A Gandhi is no use when tomorrow’s battles are fought with deadlier weapons. No, you’ll need a Godse. And I will rise.”

The Father and the Assassin is at the National Theatre until June 18, 2022