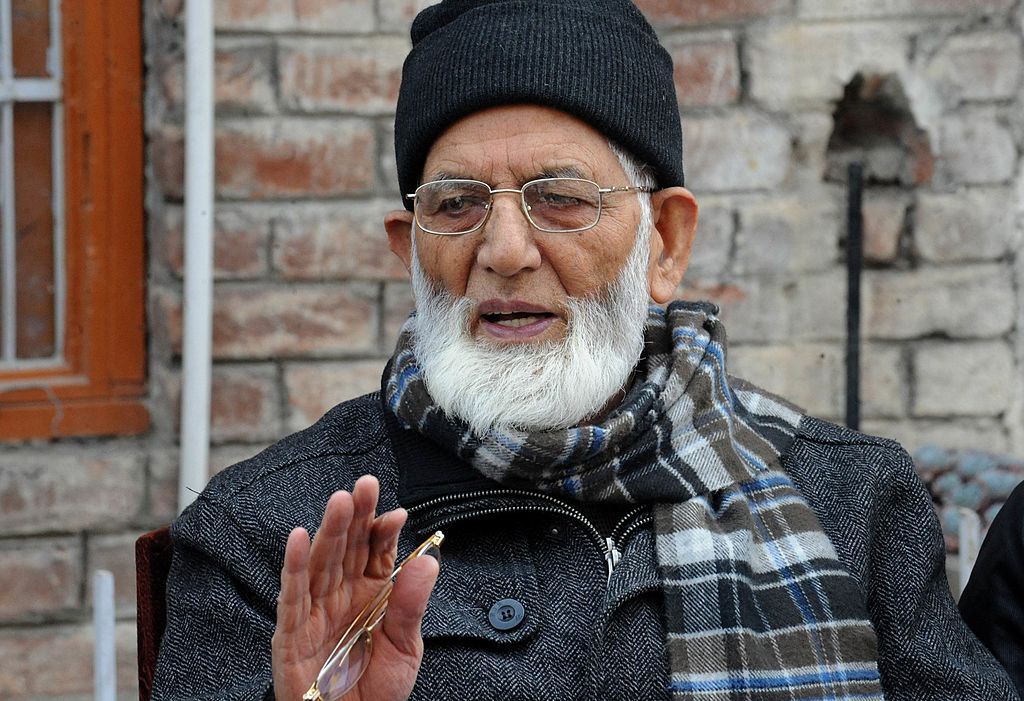 There was tight security with mobile connectivity by and large snapped in Indian Kashmir.

Geelani, 91, was buried at a mosque near his home, according to his wishes, his close aides said.

However, his son Naeem said they wanted to bury him at the Idgah in downtown Srinagar.

Geelani, who spearheaded separatist politics for over three decades in Jammu and Kashmir, died after a prolonged illness on Wednesday (1) night at his residence in Hyderpora on the outskirts of Srinagar.

His family was asked to carry out the burial at night as a precautionary measure as intelligence reports suggested trouble by some groups in the Kashmir Valley.

Strict restrictions were imposed throughout the Valley to prevent people from assembling and there was heavy deployment of security forces.

Mobile phone services and the internet were shut down to prevent rumours and fake news from circulating.

Barricades were erected at various places and all vehicles were being thoroughly checked.

Pakistan prime minister Imran Khan paid tribute to Geelani, who had been under house arrest for most of the past 11 years and was ill for several months with heart and kidney problems.

He was jailed for nearly 10 years after 1962 and after that was often restricted to his home.

Since his youth, Geelani had been a member of Jamaat-i-Islami, the territory’s largest political-religious organisation that was banned by the Indian government in 2019.

He rejected any direct talks with New Delhi until it “accepts Kashmir as a disputed territory”.

All Indian governments since independence in 1947 have insisted on the country’s sovereignty over all of Kashmir.

His uncompromising stance also had critics in Kashmir.

Mehbooba Mufti, a former Kashmir chief minister, said on Twitter: “We may not have agreed on most things, but I respect him for his steadfastness and standing by his beliefs.”

Geelani was ‘‘adamant that the destiny of Kashmir and Kashmiris lay with Pakistan’’ and ‘‘implacably hostile to the idea of an independent Kashmir’’, Sumantra Bose, a political scientist, said.

”It was his steadfastness of character in the face of tribulations and adversity – rather than his Islamic orthodoxy and loyalty to Pakistan – that earned him a place of honour in the hearts of many Kashmiris”, he wrote in an article in the BBC.

Kashmir is one of the world’s most militarised zones, with 500,000 Indian security forces deployed in the region.

Tens of thousands, mainly civilians, have died since an insurgency erupted in 1989.

The government cancelled the region’s semi-autonomous status in August 2019 and divided it into two centrally controlled territories, sparking new anger in the region.

A security clampdown imposed at the time saw internet services cut for more than a year, while scores of political leaders were detained.

‘All good things have to come to an end:’ Maitreyi Ramakrishnan on Never…

History books have few lines on Samrat Prithviraj, lot of chapters on Mughals:…