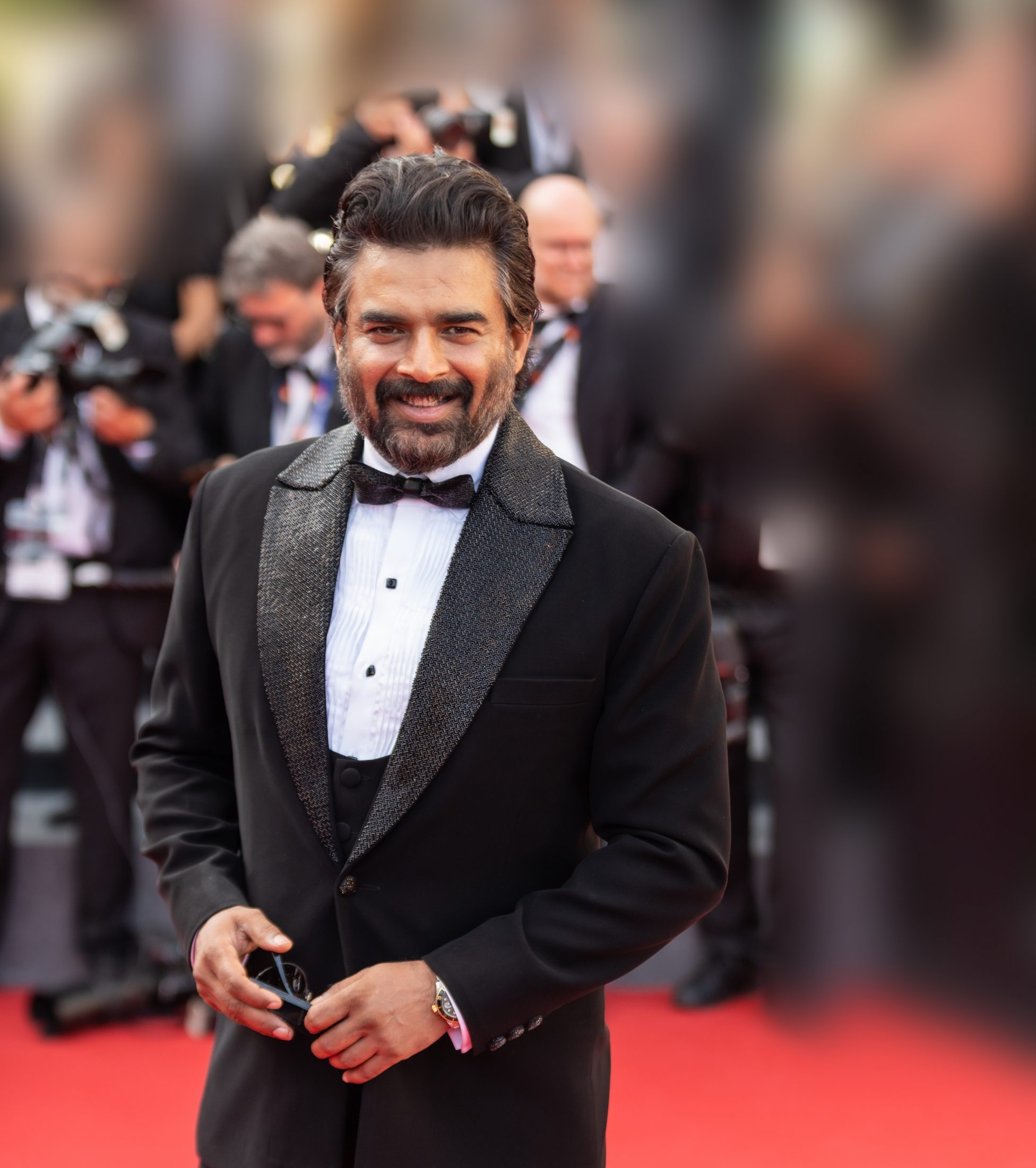 What R Madhavan has done with this week’s big cinema release Rocketry: The Nambi Effect is perhaps the most remarkable challenge undertaken by any Indian actor.

He has written, produced, directed, and played the demanding lead role in the big budget biopic, along with simultaneously shooting it in multiple languages. The story of an aerospace engineer, who was instrumental in developing the liquid fuelled rocket engine and then wrongly accused of espionage and arrested, has been made in Hindi, Tamil, and English, but will also be released in other languages. This includes a cameo from Shah Rukh Khan in the Hindi and English version.

Apart from masterminding the film, Madhavan has also delivered one of this year’s finest performances in the title role of Nambi Narayanan, from his youth to old age.

Eastern Eye caught up with the multi-talented star after a standing ovation at Cannes Film Festival to discuss Rocketry: The Nambi Effect, his close connection to cinema, why he undertook such a mammoth challenge and future plans.

How do you reflect on your extraordinary cinema journey?
Oh, my extraordinary journey as you call it has been more of luck and providence than my hard work I feel. I’ve been in the right place at the right time with the right experience behind me and therefore it’s been the most blessed journey. I don’t think I can replicate it, but I look back with satisfaction and gratitude.

What is it that first connected you to the Nambi Narayanan story?
His story connected with me big time because this man was oblivious of his own achievements, for the sake of his nation. He was just hurt at what they had done to him and his whole attention revolved around proving his innocence. And telling the country that he was innocent! Whereas when I looked at his story there was a lot more because his contribution to this country was extraordinary and such a patriot I’ve never seen.

What made you want to embrace the seemingly impossible challenge of writing, directing, producing, and starring in it?
I wanted to write the story because I understood the technology behind what Dr Nambi Narayanan had achieved in terms of building the liquid fuel engine and beauty of it. I’m engineering inclined and technologically sound, so was able to write it. I wanted to act in it because every actor dreams of playing a lifetime role, from young to an old age. So that’s the small and shallow attitude I went in towards acting in this film. But it’s only after I met Nambi Narayanan I realised the mountain of a challenge in front of me.

What about producing and directing it…
I wanted to produce it because nobody else believed in making a film like this as it was so technical, but also at the same time commercial. In the second half, people weren’t able to see the merit and I didn’t want to justify the stand I was taking, so decided to put my money where my mouth is. I didn’t want to direct it.

Really, tell us about that?
Directing was thrust upon me at the very last minute, when the choice was whether to drop the film because the original director couldn’t do it or soldier on. My funders, producers and partners thought it’s a great idea for me to step into it now because I understood the subject and man so well.

What made you want to shoot it in three different languages?
It was shot in English because that is the most natural language. Everybody spoke English, be it at Princeton, France, Russia, or Scotland. Also, initially they spoke English all the time. I made it in Tamil because Nambi Narayanan is a Tamilian and so was everybody in this family. I made it in Hindi because I wanted the country to understand the story. For the English and Hindi version, we have Shah Rukh Khan sir in it and for the Tamil version and others in the south, we have Suriya in it.

What makes Nambi Narayanan a special individual?
He’s special because he’s not only a very good-looking man in his younger age, but also the good boy in class. The kind we pick on simply because they follow the rules, toe the line, have their clothes ironed and are the teacher’s pet. These are people students and kids love to pick on because they make them feel inadequate. That somehow transcends into society.
Nambi Narayanan unfortunately fell in that bracket. How could such a good, handsome and genius exist. Therefore, it makes him very special because despite all the injustices meted out to him, he is still deeply patriotic about India today.

Which audience are you hoping connects with this film?
I hope people from around the world connect to this film simply because we realise that there are many types of patriots, including the likes of Nambi Narayanan, who know they will never be applauded or recognised, yet put their lives on the line and achieve what they want for the sake of their country, without expecting anything in return. It is these people the country needs to nurture. Therefore, this story is important, and another Nambi Narayanan should not happen in any other country, so I’m hoping that people across the world are able to connect to it.

What was Nambi Narayanan’s reaction to the film?
When he saw the film, we were all desperately waiting for him to let us know what he thought. He was very silent, came out, went to the bathroom, and then said I have a flight to catch, and I’ll talk to you later. We were all very worried, wondering whether he liked the film or not. He just gave me a hug and took his flight.

What happened next?
Eight hours later he called me from his home and said ‘Maddy, I have seen many things that most men will not see in their lives and more things most men should not see. I thought I had seen everything but after seeing the movie today I went into introspection wondering whether all that was shown is true. He said the answer to that is, absolutely true! He also stated, that ‘now I want to see the outcome of this film and want people to see it. I want to see how people react to a story like this. Thank you for giving me the desire to live long enough to see the outcome of this film.’ That completely moved all of us and I couldn’t have asked for a better reaction.

What is your favourite moment in the film?
There is a favourite moment, but honestly there are many because this film has many firsts. The first where all the actors have been shown between the age group of 29 to 79 with no prosthetics, stuck-on beards and false padding being used. Everything is original, so you believe everything else in the story is true. Secondly, you might have seen many films with rockets taking off and in space, but nobody has ever seen a rocket engine. Believe me, a rocket engine looks like a piece of beautiful diamond jewellery. And it’s the loudest noise that man has ever heard. You’ll get to see that for the first time on screen. There are many such firsts.

What about the actors shooting in multiple languages?
Yes, it’s the first film shot with live sound where each actor speaks in three langu­a­ges, one shot after the other. It’s shot in sync sound over eight countries and is a period film. Imagine the outcome of that. So, there are many such moments, but the most exciting is something I can’t reveal now. But once the film is out, you realise what that moment is in the climax.

You have achieved so much but keep pushing to a higher level of success?
You may think I’ve achieved much, but I still think I’m at the threshold. I’ve just directed my first film and am biting my fingers, so have a long way to go if you look at what others have managed to achieve. But I’m grateful for this journey and have come out unscathed so far. I hope that run continues.

Will you be directing more films?
No, directing a movie requires a lot of qualification. I don’t know if I’m qualified enough to direct, plus I enjoy acting. In the few years I have left as a main lead, I want to act in as many films as possible (to catch up) and then we’ll see about direction.

What inspires you?
Good cheer, niceness and a good human being inspires me the most and Nambi Narayanan is actually one of those guys. I love people who maintain their personality despite the adversities – those are the kind of people and things that motivate and inspire me.

Why should we watch Rocketry: The Nambi Effect?
You should watch Rocketry: The Nambi Effect if you want to know the spectacular achievements of Indian engineers, technicians, rocket scientists and doctors who’ve gone around the world and spread their wings. And spread the good work. I mean we, as technicians, have been appreciated in every country, we established ourselves in. This film is a homage to all those technicians, engineers, people in the medical field, as well as IT, who managed to make us proud.

Rocketry: The Nambi Effect is in cinemas now in multiple languages

Life and signs of an Asian deaf artist