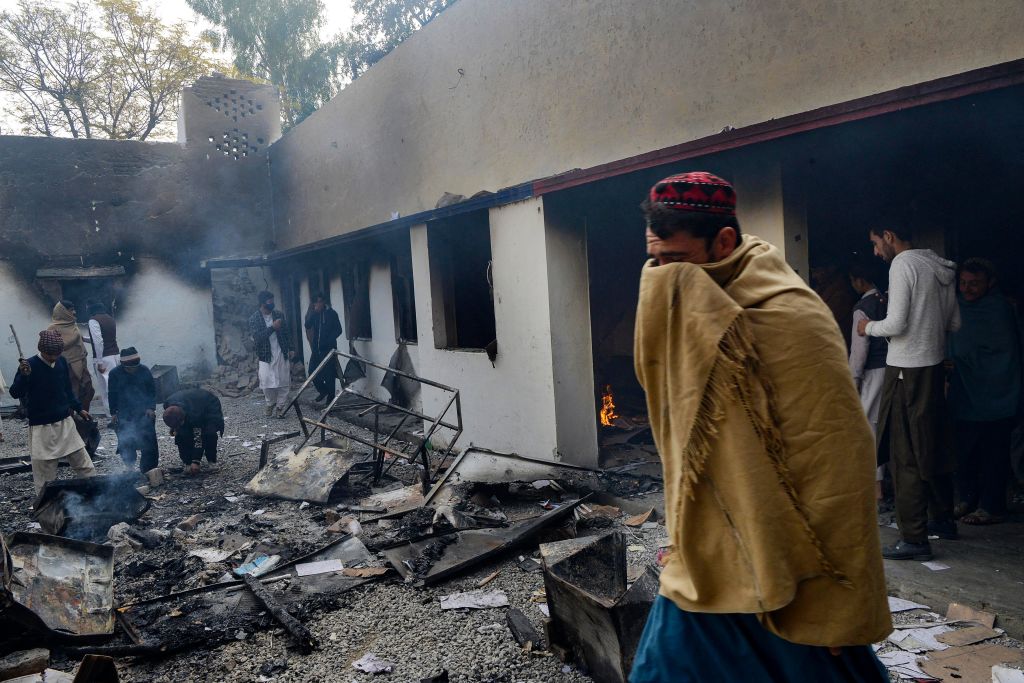 Demonstrators gather at a police station which was set on fire after thousands of people mobbed it demanding that officers hand over a man accused of burning the Koran, in Charsadda, in the Khyber Pakhtunkhwa province on November 29, 2021. (Photo by ABDUL MAJEED/AFP via Getty Images)

THOUSANDS of people mobbed a Pakistan police station, setting fire to it and nearby check-posts after demanding that officers hand over a man accused of burning the Koran, police said Monday (29).

The mob of up to 5,000 people surrounded the police station in Charsadda town in northwestern Khyber Pakhtunkhwa province on Sunday (28) night, also setting fire to more than 30 cars.

On Monday morning, around 2,000 people remained outside the police station, burning the uniforms of officers.

“The mob stormed the police station asking to hand over the man to them so they could burn him alive like he burnt the Holy Koran,” district police chief, Asif Bahadur said.

The identity and religion of the accused has not been disclosed, Bahadur said.

“The motive behind burning the copy of the Holy Koran is still unknown but we are investigating.”

Blasphemy is a hugely sensitive issue in Muslim-majority Pakistan, where even unproven allegations can stir mobs and violence.

Rights groups say the legislation is often hijacked for personal vendettas, with minorities largely the target.

A Christian couple was lynched and burnt in a kiln in Punjab in 2014 after being falsely accused of desecrating the Koran.

Former Punjab governor Salman Taseer was gunned down by his bodyguard, Mumtaz Qadri, in Islamabad in 2011 over his call for blasphemy law reform. The brazen killing saw Qadri feted as a hero by Islamists.

Asia Bibi, a Pakistan Christian woman and a labourer from central Punjab province, was convicted of blasphemy in 2010 and was on death row until her acquittal in 2018, which prompted days of violent Islamist demonstrations.

She and her family later fled the country for Canada.

The country has frequently been paralysed in recent years by anti-blasphemy protests waged by the Tehreek-e-Labbaik Pakistan party over the publishing of cartoons depicting the Prophet Mohammed by a French satirical magazine.