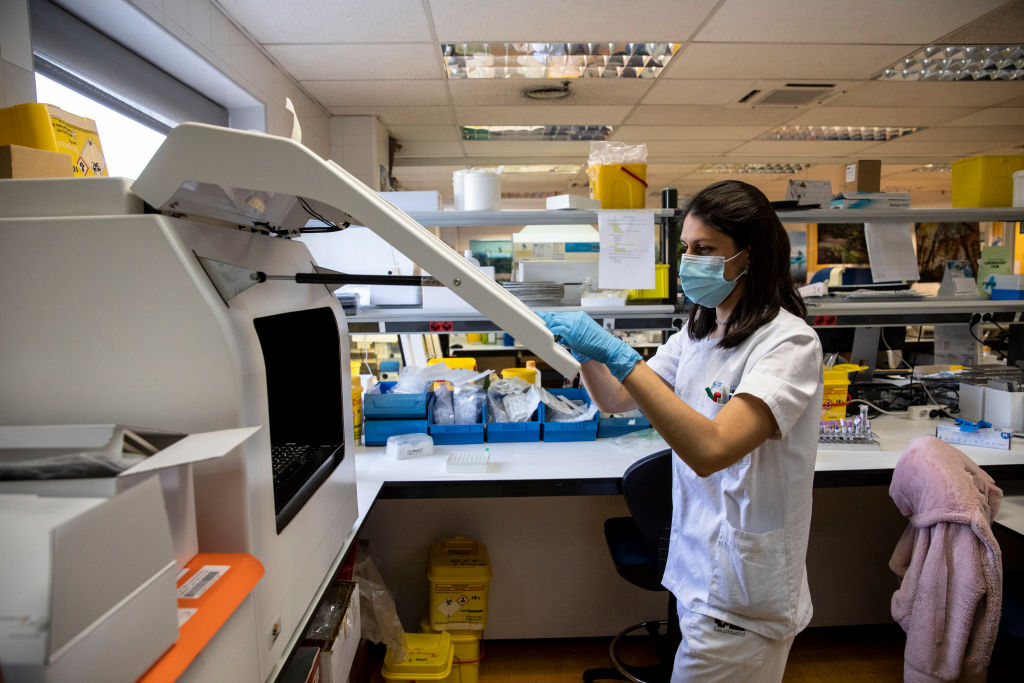 MADRID, SPAIN – JUNE 06: A medical laboratory technician places closes an automated nucleic acid extractor with suspected monkeypox samples inside before being PCR tested at the microbiology laboratory of La Paz Hospital on June 06, 2022 in Madrid, Spain. Europe is at the centre of the monkeypox virus outbreak, the World Health Organisation reported 780 confirmed cases with Britain, Spain and Portugal reporting the largest numbers of patients. (Photo by Pablo Blazquez Dominguez/Getty Images)

The latest data released Tuesday by the UK Health Security Agency (UKHSA) showed the number of confirmed monkeypox cases in Britain has reached 1,076.

According to UKHSA, up to June 26, 2022, there were 1,076 laboratory-confirmed cases in Britain. Of these, 27 were in Scotland, five in Northern Ireland, nine in Wales and 1,035 in England. Since the WHO’s previous update on June 17, there have been 1,310 new cases reported, with eight new countries reporting cases.

It means almost a third of all cases in the world reported since the current outbreak started have emerged in Britain.

In its latest update issued Monday, the WHO said since Jan. 1, and as of June 22, there have been 3,413 laboratory-confirmed cases and one death reported to WHO from 50 countries and territories in five WHO regions.

WHO said the majority of laboratory-confirmed cases, 2,933 of the 3,413 cases, are in the WHO’s European region. This accounts for about 86 per cent of the total.

“The monkeypox outbreak in the UK continues to grow, with over a thousand cases now confirmed nationwide,” UKHSA incident director Sophia Makki said, “We expect cases to continue to rise further in the coming days and weeks.”

Makki urged people attending large events over the summer, or having sex with new partners, to be alert to any monkeypox symptoms, and get tested rapidly to help avoid passing the infection on.”

Currently, the majority of cases in Britain have been in men who are gay, bisexual or have sex with men, but UKHSA said anyone who has had close contact with an individual with symptoms is also at increased risk.

With an extensive program of summer music events on the horizon, Makki said if people were concerned they may have monkeypox, they should not go to the events, meet with friends or have sexual contact.

At 7.3 per cent, India ranks 7th in crypto ownership: UN

India’s investment in knowledge since 1947 is paying off today: White House Director of National…

India and US did more than any other country in the fight against COVID-19: Dr…

UK’s Liz Truss: Energy giants should be held to account but profit is…

Only 1% of UK firms offer cost-of-living payments to staff: ONS

Steve Toussaint on his casting in House of the Dragon:…