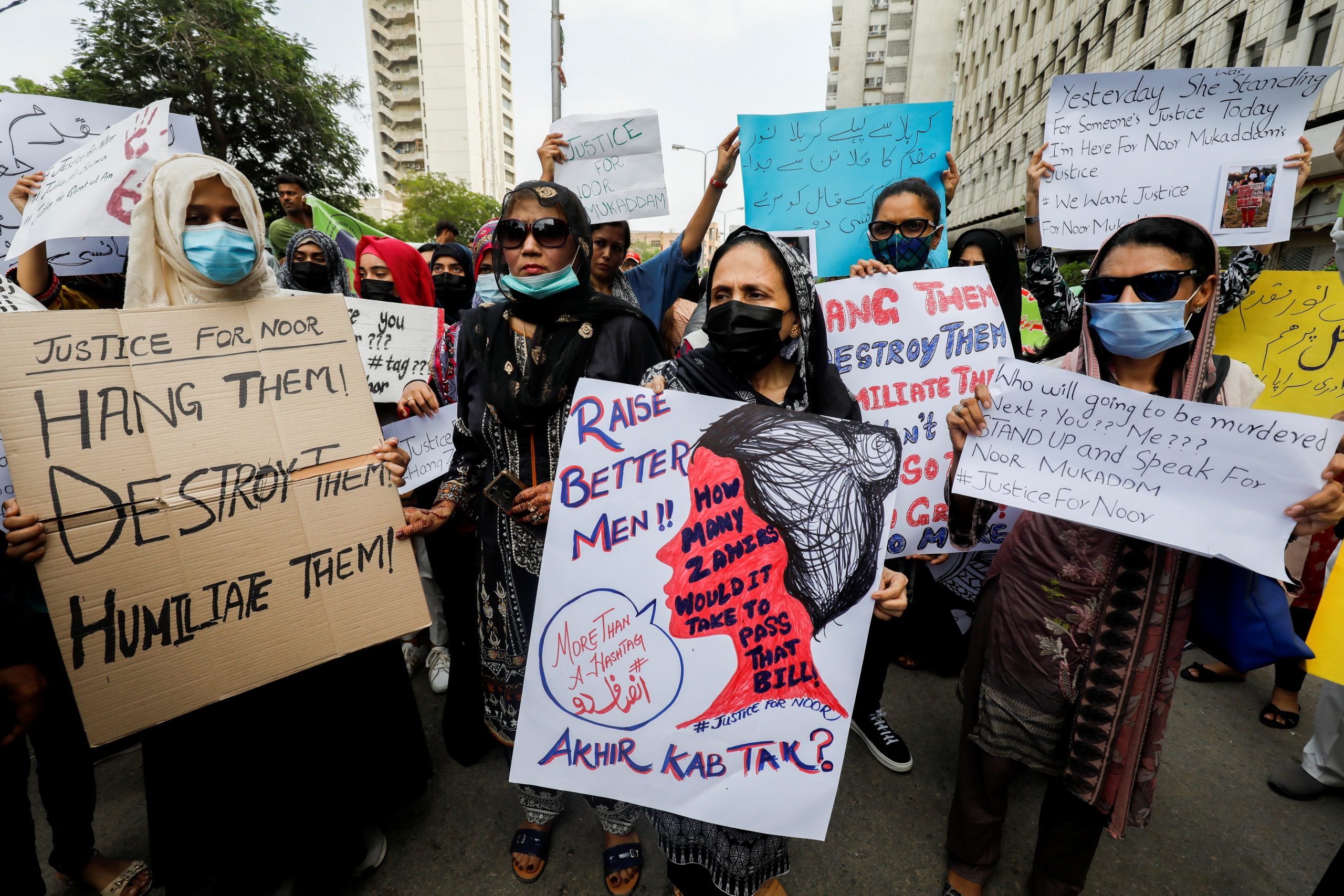 People carry signs against the killing of Noor Mukadam, daughter of a former Pakistani diplomat, during a protest in Karachi, Pakistan on July 25, 2021. (Photo by REUTERS/Akhtar Soomro)

A GRISLY murder in the heart of Islamabad involving families from the privileged elite of Pakistani society has dominated headlines for the past week, stirring national outrage over femicides in the south Asian nation.

Noor Mukadam, 27, the daughter of a former Pakistani diplomat, was found beheaded in a posh neighbourhood of the capital on July 20. Police have charged Zahir Jaffer, a US national and scion of one of Pakistan’s wealthiest families, with murder.

Investigators say the two were friends, and Jaffer lured Mukadam, the daughter of Pakistan’s former envoy to South Korea, to his home, held her there for two days, and then brutally murdered her.

Hundreds of women are killed in Pakistan annually, and thousands more are victims of brutal violence, but few cases get sustained media attention, and only a small fraction of perpetrators are ever punished.

This killing though, which touched a segment of society that is often thought to be immune to systemic injustice, has sparked a public outcry, unlike any other recent case.

“The status of the families involved, especially the family of Zahir Jaffer, and of course Noor’s father being a former ambassador, and this happening within the elite circles of Islamabad…all of that combined definitely has brought more attention to this case,” commented Nida Kirmani, associate professor of sociology at the Lahore University of Management Sciences.

Mukadam’s murder has become the most keenly reported femicide in recent history. Social media erupted with furious disgust, and there have been protests and vigils in major cities, as well as among the Pakistani diaspora as far away as Canada and the United States.

Facing public anger, the Jaffer family took out full-page advertisements in newspapers distancing themselves from the murder and calling for justice.

Life for women in Pakistan’s rural areas is markedly different from that in urban centres, particularly Islamabad, where chic cafes and shopping areas cater to the city’s mix of the wealthy intelligentsia, government officials, diplomats, expatriates, and foreign journalists.

For many women in the country’s capital, even that semblance of freedom and safety has been shattered.

“I have daughters, too, and I worry day and night if this happens to my own daughter, who will stand with me?” Amna Salman Butt, said at a vigil for Mukadam in Islamabad this week that drew hundreds. “When someone mistreats us, will we have to come up with hashtags too?” she said, referring to the #JusticeForNoor hashtag that has dominated Twitter in Pakistan.

“Every woman I have spoken to after Noor’s case speaks about them feeling a heightened sense of fear, from the men around them,” said Benazir Shah, a Lahore-based journalist. She said some complain of not being able to sleep at night.

While the daily twists and turns of the trial unfold in the national media gaze, rights groups in Pakistan say lawmakers should pass a landmark bill meant to tackle domestic violence to assuage some anger.

The bill streamlines the process for obtaining restraining orders, and defines violence broadly, to include “emotional, psychological and verbal abuse.”

Earlier this month, lawmakers sought the opinion of a council of Islamic scholars on whether the legislation adhered to Islamic principles.

Qibla Ayaz, who heads the council, said they had only informally discussed the bill, but felt its ambiguous language was unacceptable in Pakistan’s conservative society.

“Does this mean that a daughter or wife can complain when a father or husband is stopping her from going outside the house? This may not be acceptable to all Pakistanis,” he said.

“We all agree on the goal of stopping violence against women…but our sense is this bill might actually cause new social tension and lead to more domestic violence,” Ayaz added.