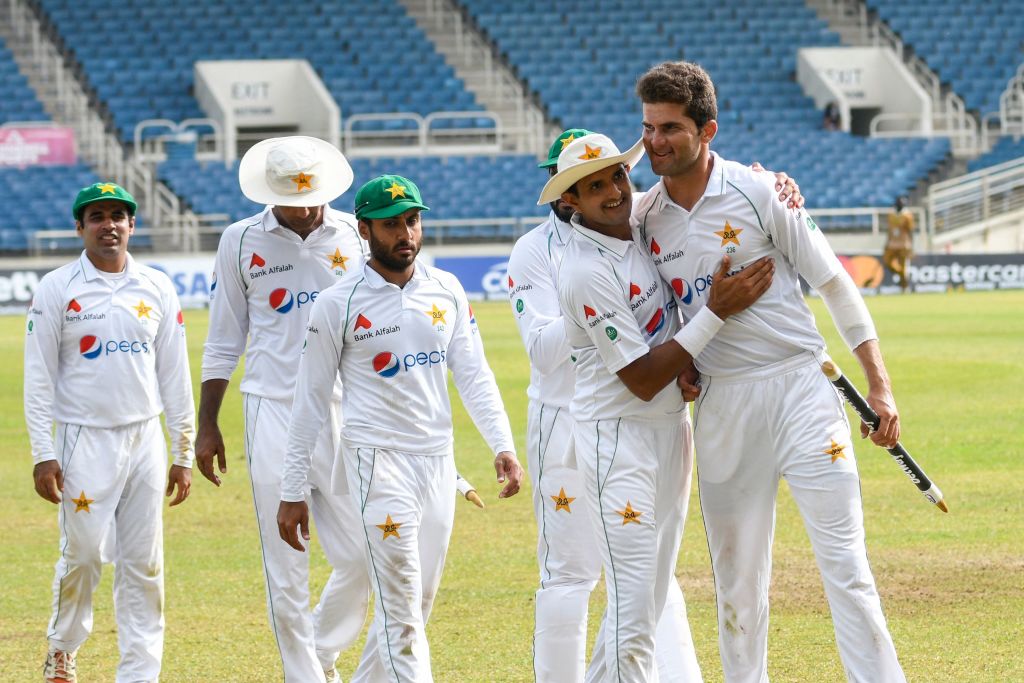 SHAHEEN Shah Afridi completed a 10-wicket match haul to bowl Pakistan to a series-levelling 109-run victory over the West Indies in the final session of the second and final Test at Sabina Park in Kingston on Tuesday (24).

Frustrated by the loss of an entire day’s play and another session to rain and a sodden outfield over the weekend, Shaheen kept Pakistan’s hopes alive with a devastating first innings effort of six for 51 on day four – his best Test innings performance – and returned on the final day to strike critical blows.

Then, when it seemed the weather would ruin their desperate push for victory, he came back for a final spell with the second new ball to take the last two wickets and give his team a tremendous triumph with one hour to spare.

Starting the day at 49 for one and facing the unlikely target of 329, the West Indies were again let down by their top-order batting, sliding to 113 for six in the mid-afternoon despite a battling 39 from captain Kraigg Brathwaite.

Former skipper Jason Holder eventually top-scored with 47 but it was his demise to Nauman Ali, the left-arm spinner’s third wicket, which eased a rising sense of panic in the Pakistan camp. Then Afridi, new ball in hand and with eight wickets down, trapped Kemar Roach leg-before.

Afridi then induced a mistimed drive from Joshua da Silva for Faheem Ashraf to take the catch at mid-on and dismiss the West Indies for 219 and seal yet another come-from-behind effort for Pakistan in the Caribbean.

As in 2005 and 2011, Pakistan, this time led by Babar Azam, lost the first Test but rebounded to take the second and share the honours with the hosts.

“This was a very important win for us, especially given the way we lost that first Test,” said Babar, reflecting on the heart-breaking one-wicket defeat at the same venue nine days earlier.

“My partnership with Fawad Alam and his brilliant century was, of course, valuable, but I have to give massive credit to the bowling of Shaheen because he makes things a lot easier for us.”

Shaheen’s second-innings figures of four for 43 gave him a match haul of 10 for 94 and with a series-leading tally of 18 wickets in the two matches at an average of 11.28, it was inevitable that the 21-year-old would be both man of the match and man of the series.

“It was a great effort, a team effort. This is what the team needed and I am just happy that I was able to deliver,” said the left-arm pacer.

“It was really tough out there, extremely hot and even though we were picking up wickets along the way we really had to work very hard and credit must go to the entire bowling unit.”

Shaheen started the ball rolling for Pakistan within the first half-hour of the day when he removed nightwatchman Alzarri Joseph via an ambitious top-edged hook which was held by wicketkeeper Mohammad Rizwan. He then returned just as a shower was about to sweep across the ground in the mid-afternoon to break a stubborn seventh-wicket partnership between Kyle Mayers and Holder.

Mayers’ dismissal was a great relief to Pakistan as just a couple of overs earlier he was dropped at short-leg by Abid Ali off Nauman.

Abid was also badly at fault when he missed Brathwaite at slip off Faheem in the morning session.

On 25 at the time, the West Indies captain carried on to 39 but fell shortly after lunch when a top-edged cut off Nauman found a grateful Fawad Alam at backward point.

“Consistency is what we need. I just think it is a mindset because Test cricket is never easy and all the guys technically can bat,” said Brathwaite, attempting to pinpoint the cause of his team’s repeated batting failures.

“We have to find ways to build innings, to cope with the first 30 balls and get through those tough periods.”