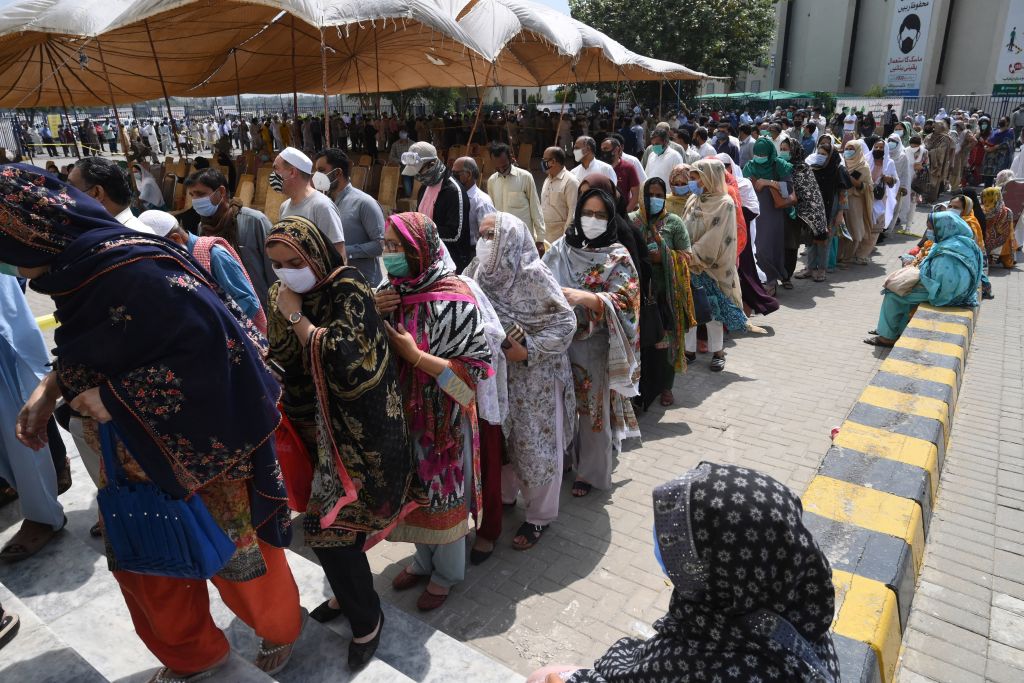 People wait in queues for their turn to receive a dose of the Sinopharm Covid-19 vaccine at a vaccination camp in Lahore on May 5, 2021. (Photo by ARIF ALI/AFP via Getty Images)

PAKISTAN’S coronavirus death toll crossed the grim figure of 22,000 on Monday (21), as Sindh province continued to report the highest number of fresh cases in the country.

Thirty patients died and 907 new cases were detected in the past 24 hours, the ministry of national health services said in its daily bulletin.

Of the 907 new cases, Sindh’s share stood at 595. The coronavirus has greatly impacted the province, which so far reported more than 3,07,000 cases.

However, the immunisation drive picked up pace as Pakistan on Sunday (20) received 1.55 million doses of a Chinese vaccine.

After receiving the SinoVac doses, minister for planning and chief of the National Command Operation Centre (NCOC), Asad Umar, tweeted that more than 2.3 million doses were administered in the past week at a rate of 332,877 shots per day, which was the “highest so far in any week” in terms of the number of vaccine doses administered.

Pakistan’s Covid-19 positivity rate has also fallen to 2.61 per cent, a major improvement from 11.63 per cent recorded on April 20.

So far, 893,148 people have recovered from the disease in the country. There are 34,020 active cases. Nearly 13 million doses of vaccines have been administered. The target is to inoculate 70 million people with two doses by the end of this year, officials said.