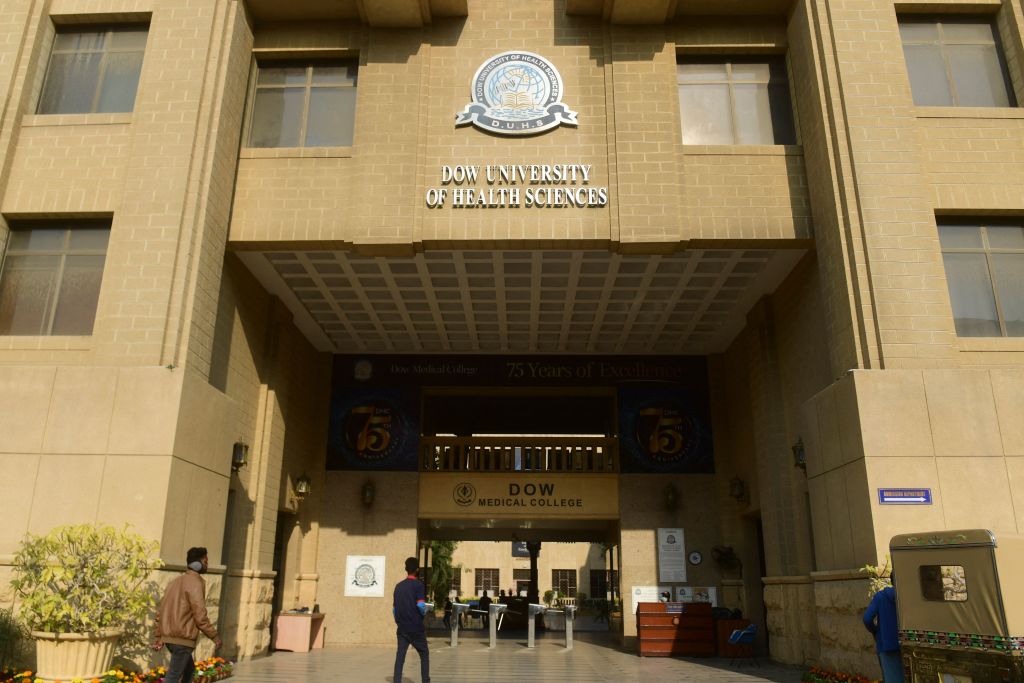 In this picture taken on January 13, 2022, students walk at an entrance to the Dow University of Health Sciences, where Pakistan-born surgeon Muhammad Mansoor Mohiuddin studied in the 1980s, in Karachi. Friends and former fellow students of the Pakistan-born surgeon behind the world’s first pig-to-human heart transplant say they earmarked him for greatness from his student days. Mohiuddin made headlines last week as the co-founder of the US university programme that successfully transplanted the heart of a genetically modified pig into a gravely ill American man. (Photo by ASIF HASSAN/AFP via Getty Images)

FRIENDS and former classmates of the Pakistan-born surgeon behind the world’s first pig-to-human heart transplant say they earmarked him for greatness from his medical school days.

Karachi-born Muhammad Mansoor Mohiuddin made headlines last week as the co-founder of the US university programme that successfully transplanted the heart of a genetically modified pig into a gravely ill American man.

While hailed as a medical breakthrough, the procedure also raised ethical questions – particularly among some Jews and Muslims, who consider pigs to be unclean and avoid pork products.

None of that worried Mohiuddin’s friends and former colleagues in Pakistan, who remember him as an ace student with a passion for medicine.

“He would be so interested, always there, always available and always ready to get involved in surgery,” said Muneer Amanullah, a specialist who attended Karachi’s Dow Medical College with Mohiuddin in the 1980s.

“There was exhilaration that this has been done by a graduate from this college,” he said.

Mohiuddin was quick to share the limelight with a team of 50 from the University of Maryland Medical School.

“They were all experts in their respective fields,” he said.

While the prognosis for the recipient of the pig’s heart is far from certain, the surgery represents a major milestone for animal-to-human transplants.

About 110,000 Americans are currently waiting for an organ transplant, and more than 6,000 patients die each year before getting one, according to official figures.

To meet demand, doctors have long been interested in so-called xenotransplantation, or cross-species organ donation.

“We were working on this model for 18 years,” Mohiuddin said.

“Those 18 years were dotted with different phases of frustration – as well as breakthroughs – but finally we have done it.”

The surgery is not without controversy, however, especially given Mohiuddin’s Islamic faith.

Pigs are considered unclean by Muslims and Jews – and even some Christians who follow the Bible’s Old Testament literally.

“In my view, this is not permissible for a Muslim,” said Javed Ahmed Ghamdi, a prominent Islamic scholar, in a video blog where he discussed the procedure.

But another Islamic scholar in Pakistan gave the procedure a clean bill of health.

“There is no prohibition in sharia,” Allama Hasan Zafar Naqvi said, calling it a “medical miracle”.

“In religion, no deed is as supreme as saving a human life,” added Mohiuddin.

In Karachi, the surgeon’s fellow alumni feel their former colleague may now be destined for even greater glory – medicine’s top prize.

“I think… the whole team is in for it, in for the Nobel Prize,” said vice-chancellor Qureshi.