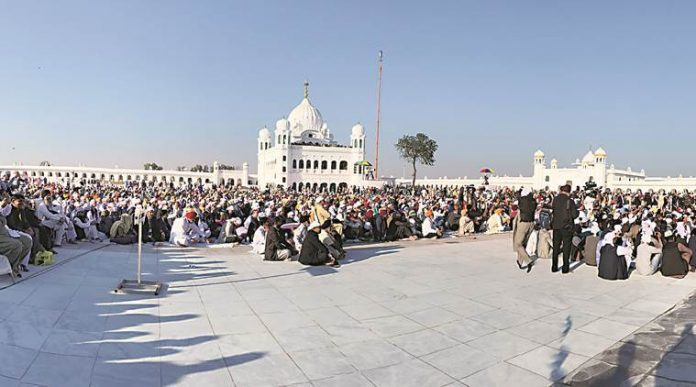 Pakistan on Monday reopened the Kartarpur Corridor more than three months after it was temporarily closed due to the COVID-19 pandemic, but no Indian pilgrim visited the Gurdwara Darbar Sahib, a top official said.

India temporarily suspended the pilgrimage and registration for the Kartarpur Sahib Gurdwara in Pakistan on March 16 in view of the coronavirus outbreak.

The ETPB looks after the holy places of minorities in the country.

He said a “special Ardas” was held at Gurdwara Darbar Sahib, Kartarpur.

“Pilgrims from Pakistan and India are allowed to visit the Darabar Sahib by following the SOPs of social distancing. The ETPB and Pakistan Sikh Gurdawara Parbhandhik Committee have made special arrangements for the safety of pilgrims,” he said.

Earlier, Foreign Minister Shah Mehmood Qureshi said Pakistan was reopening the Kartarpur Sahib Corridor for all Sikh pilgrims. “I convey to the Indian side our readiness to reopen the corridor on 29 June 2020, the occasion of the death anniversary of Maharaja Ranjeet Singh,” he said.

Sources in the government of India in New Delhi last week said Pakistan is trying to create a mirage of goodwill by proposing to reopen the corridor on June 29. They said India will take a decision on the matter after consulting health authorities and other concerned stakeholders.

The sources also wondered why Pakistan proposed to reopen it in such a short notice while a bilateral agreement on the corridor provided for information to be shared by both sides at least seven days before the date of travel.

In November last year, the two countries threw open the corridor linking Dera Baba Sahib in Gurdaspur in India and Gurdwara Kartarpur Sahib in Pakistan, in a historic people-to-people initiative as part of commemoration of the 550th birth anniversary of Sikhism founder Guru Nanak Dev.

Kartarpur Sahib Gurdwara is located in Pakistan’s Narowal district across the river Ravi, about four kilometres from the Dera Baba Nanak shrine. It is the final resting place of Guru Nanak Dev, who had spent the last 18 years of his life in Kartarpur.

Indian pilgrims of all faiths are allowed to undertake round the year visa-free travel to the historic gurdwara.

The relations between India and Pakistan nosedived after India scrapped Jammu and Kashmir’s special status on August 5, 2019 and bifurcated it into two union territories. Pakistan downgraded diplomatic ties with India and expelled the Indian High Commissioner.

On Tuesday, India told Pakistan to slash its embassy staff in New Delhi by half – saying it would do the same in Islamabad amidst allegations of spying.