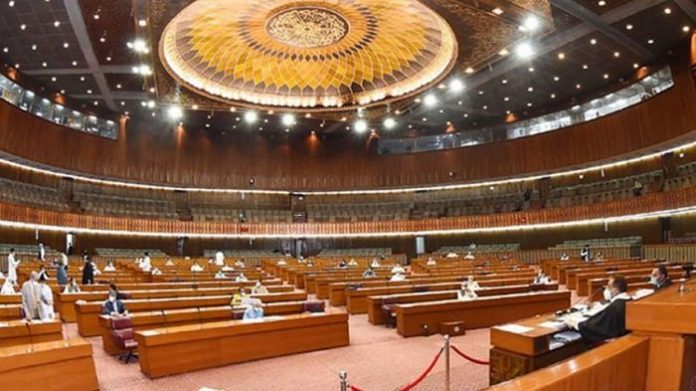 Pakistan’s Senate on Thursday unanimously approved two bills related to the tough conditions set by the global money laundering and terrorist financing watchdog FATF, a day after they were passed in the National Assembly amidst vociferous protest from the Opposition parties.

The bills include measures of freezing and seizure of assets, travel ban, and arms embargo on the entities and individuals, who are designated on the sanctions list of the United Nations and impose heavy fine and long term jails for those facilitating militancy.

The two bills passed by the National Assembly on Wednesday fulfil various requirements of the Paris-based Financial Action Task Force (FATF) which put Pakistan on its grey list in June 2016 after Islamabad agreed to implement a 27-point plan of action to improve its legal regime to curb money laundering and terror financing.

The UN Security Council Resolution 1373 made it incumbent on the member states to implement counter-terrorism measures, especially countering the financing of terrorism through their domestic laws.

The legislation was part of efforts by Pakistan to move from the FATF”S grey list to the white list.

The FATF put Pakistan on the grey list in June 2018 and asked Islamabad to implement a plan of action by the end of 2019 but the deadline was extended later on due to COVID-19.

Foreign Minister Shah Mahmood Qureshi thanked the Senate members for approving the bills and exuded confidence that after this legislation, Pakistan will come out of the FATF grey list.

Law minister Faroogh Naseem in his video message congratulated the nation over the passage of the bills in the Senate.

“This legislation will help us meet the deadline of FATF,” he said.

According to officials, an implementation report would be submitted to the FATF by August 6.

The National Assembly passed the two bills with a majority vote amid a loud protest from the Opposition parties on Wednesday. But the situation in the Senate was cordial and cooperative. The session was chaired by Chairman Sadiq Sanjrani.

Earlier, the Senate’s Standing Committee on Law and Justice, chaired by Chairman Javed Abbasi, unanimously approved the bills with some minor amendments.

The government has prepared eight bills for legislation on anti-money laundering and terror financing with a view of moving Pakistan from the FATF”s grey list to the white list.

In its third and final plenary held virtually due to the COVID-19 pandemic in June, the FATF decided to keep Pakistan in the “grey list” as Islamabad failed to check the flow of money to terror groups like Lashkar-e-Taiba (LeT) and Jaish-e-Mohammed (JeM). The plenary was held under the Chinese Presidency of Xiangmin Liu.

With Pakistan’s continuation in the ”grey list”, it will be difficult for the country to get financial aid from the IMF, World Bank, ADB, and the European Union, thus further enhancing problems for the nation which is in a precarious financial situation.

If Pakistan fails to comply with the FATF directive by October, there is every possibility that the global body may put the country in the ”Black List” along with North Korea and Iran.

The FATF is an inter-governmental body established in 1989 to combat money laundering, terrorist financing, and other related threats to the integrity of the international financial system.

It has currently 39 members including two regional organisations – the European Commission and Gulf Cooperation Council.