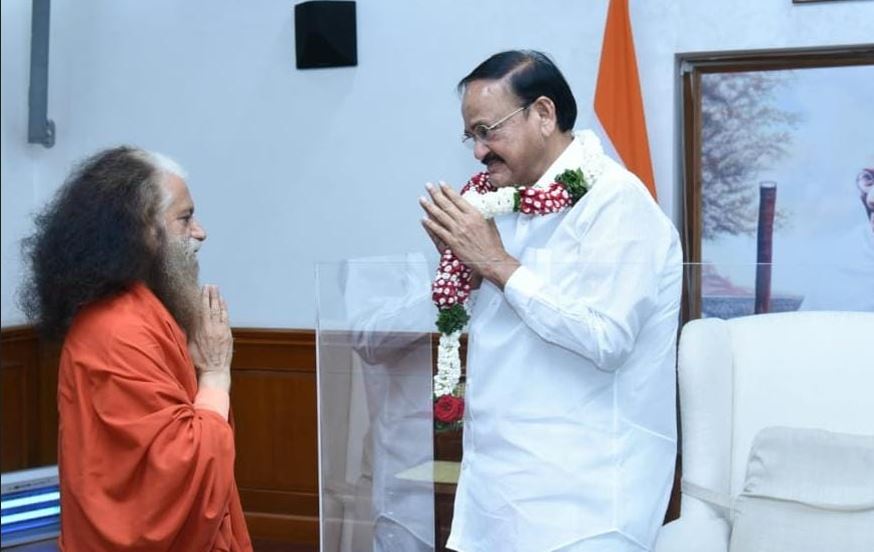 Pujya Swamiji invited him to the Ganga Aarti and presented him with a Rudraksha plant and angavastram, a statement said.

The spiritual guru also spoke about the plans for the devotees who come for the annual Kanwad Mela to the Neelkanth mountain during Shrawan Mass to participate in a campaign entitled Pani Bachao, Pani Pilao.

It utilises the energy of young Kanwadis to create temporary check dams and storing rainwater from the monsoon rains for the wild animal, including elephants of the Rajaji National Park.

According to Pujya Swamiji, it would prevent the increasing man-animal conflict and help ensure the forest remains a home for all the animals there.

Naidu expressed his happiness for the work being done for environmental protection and water conservation at the global level under the guidance of Pujya Swamiji, the statement said.

Pujya Swamiji said: “India has about 17 per cent of the world’s population but only 4 per cent of the world’s freshwater reserves. The country is currently facing a serious water challenge. The total capacity of India’s reservoirs is 250 billion cubic meters, while its total water holding capacity at the surface is about 320 cubic meters. One of the biggest challenges in India is groundwater conservation, so now connecting our religious rituals to environmental preservation can be a great agent of sustainable change and transformation.

“The concept from Shivalaya to Jal-ashaya-inspiring devotees to worship Lord Shiva by water conservation-would make Mahadev much happier with his devotees than merely doing his abhishek. The time has come that we have green rituals and inspire Religious Social Responsibility to come forward for climate action.”

On the occasion, a special book presentation of ‘Global Indians,’ chronicling the contribution of 21 distinguished Indian achievers, which also features Pujya Swamiji, was also held, the statement added.

There is no agenda when I do stand-up: Comedian Zakir Khan

Karnataka warns against cattle slaughter on Bakrid, warns of stern action against offenders

For the first time in India’s history, no Muslim MP in ruling party