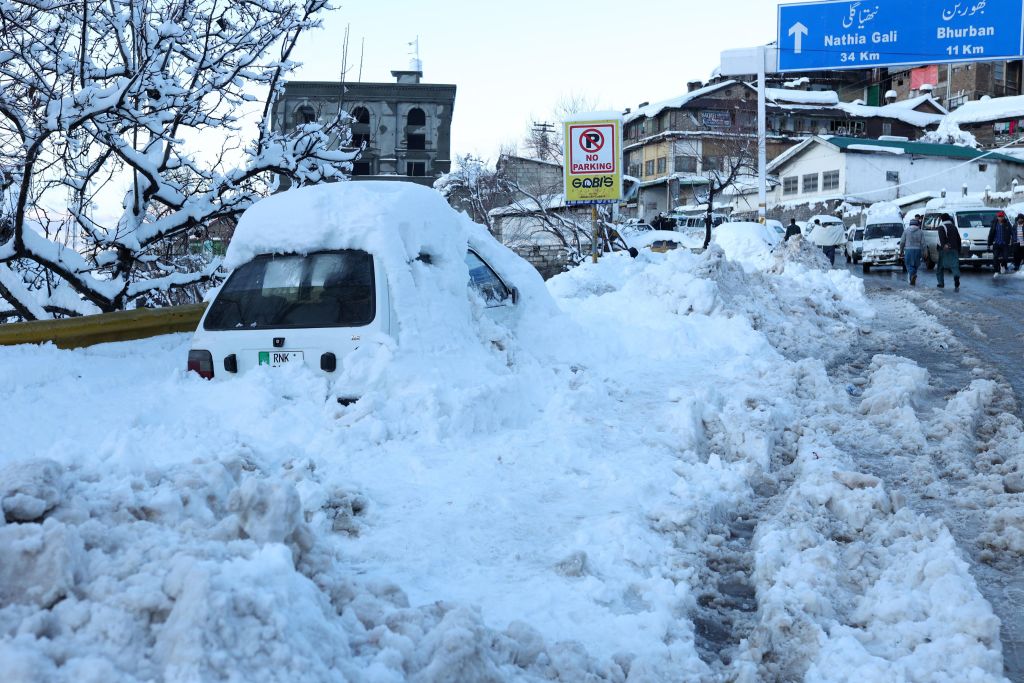 A vehicle is pictured after getting stuck in snow along a road after a heavy snowfall in Murree, around 70 kilometres (45 miles) northeast of Islamabad, Pakistan, on January 8, 2022 (Photo by AFP via Getty Images)

AS SNOWFALL thawed at a popular Pakistan mountain resort on Sunday (9), rescued tourists were found reckoning with the deaths of 22 fellow travellers in a frozen traffic jam.

“We didn’t get any type of alert from society, from the government, from Google, from the news, from the weather,” said 18-year-old Duaa Kashif Ali, a tourist from Islamabad.

“Locals helped us,” she said, after emerging from a guesthouse where she waited out the worst snowstorm witnessed by Murree in decades.

The mountain-perch town – 70 kilometres (45 miles) northeast of Islamabad – has long been a favourite for tourists, who swarmed to see vistas dusted with fresh snowfall this week.

Roads were jammed with traffic from some 100,000 visitors when a blizzard dumped four feet (1.2 metres) of snow from Friday (7) onwards.

Stuck in their cars overnight, 22 people died from the cold or carbon monoxide poisoning from exhaust fumes. Among them were 10 children.

As he spoke, a convoy of hulking heavy machinery cleared the ice-bitten roads behind him, ending two days of snowbound isolation for the satellite village of Ratti Gali.

Alongside 13 other family members and friends, they ditched three stranded cars and hiked 1.5 kilometres (1 mile) to where a guesthouse owner took them in.

In nearby Kuldana, about 5,000 people were taken in at the Army School of Logistics on Friday night.

“It was like a natural disaster,” said Major Muhammad Umar. “There was no electricity, no gas, no telephone, nothing working.”

Eleven-year-old Arosh Yasir, warming up by a gas fire with her family, said they spent the night in their car on Friday before being rescued the following morning.

“Our food was cold and there was no way back or forward,” she said.

“I started crying and praying.”

Many Pakistanis complained on social media that hoteliers had pushed up prices to capitalise on stranded customers, prompting them to sleep in cars.

Arosh said on Saturday (8) hotels were “either very expensive or had no space”, forcing them into the army camp.

On Sunday (9) afternoon, the rescue effort had largely morphed to a repair and salvage operation, aided by steady sunshine winnowing away snowdrifts.

Among clear spots in the ice were small scatterings of empty water bottles and snack food packaging, marking where many tourists spent Friday night in their cars.

“It was my worst experience,” said 21-year-old Aafia Ali, a visitor from Karachi among the party taking shelter at Ratti Gali.

Several Pakistani newspapers published scathing articles on Sunday, attacking authorities for failing to close off the area despite ample warning of heavy snow.

That sentiment was shared among those preparing to make their way off the mountain.

“The management of this area, they are responsible for this,” said Aafia Ali.