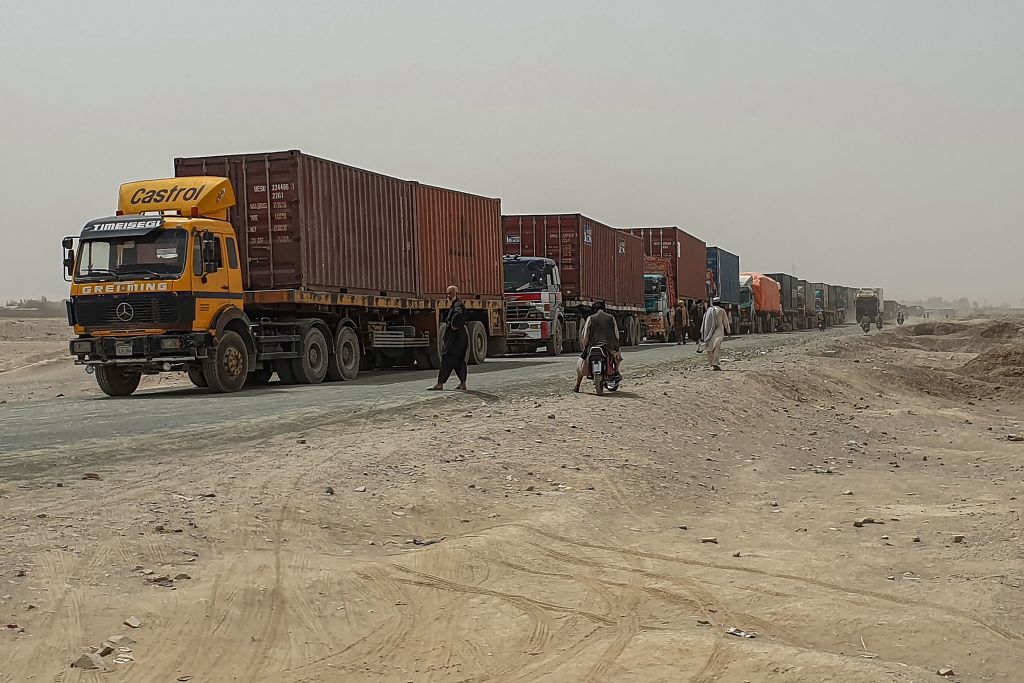 Drivers of Pakistani trucks wait along a road leading to the Afghan border crossing point in Chaman on July 28, 2021 after a key crossing between Pakistan and Afghanistan partially reopened days after the Taliban took control of the Afghan border town in a rapid offensive across the country. (Photo by ASGHAR ACHAKZAI/AFP via Getty Images)

Thousands of vehicles cross daily from Chaman in southwestern Pakistan to Spin Boldak on the other side of the border, carrying goods to Kandahar, Afghanistan’s second-biggest city.

On the way back, they usually ferry agricultural produce bound for Pakistan’s markets or ports.

The bilateral trade – worth hundreds of millions of dollars a year – ground to a halt earlier this month after the Taliban seized the dusty border town, but resumed this week with the insurgents seemingly firmly in charge.

They have captured a vast swath of the country since early May after launching a series of offensives to capitalise on the final stages of the withdrawal of foreign troops.

While they have not yet taken any provincial capitals, they have captured a string of key border posts with Iran, Tajikistan, Turkmenistan and Pakistan which provide vital revenue from customs duties on goods arriving in the landlocked country.

“We loaded grapes in Kandahar and on the way we have been extorted at least three times,” trucker Hidayatullah Khan said at Chaman.

That was on top of the taxes he had to pay Taliban officials in Spin Boldak and Afghan government customs officials who have opened shop in Kandahar.

Truckers interviewed in Chaman this week told of chaos and confusion on the Afghan side of the border.

Imran Kakar, vice president of the Pakistan-Afghan Joint Chamber of Commerce, gave an example of a truck carrying fabric from Karachi to Kandahar.

The Taliban charged the driver Rs 150,000 (£662) as duty in Spin Boldak, but when the vehicle reached Kandahar government officials were also waiting.

“We had to pay even higher customs duties as they don’t acknowledge the payments made to the Taliban,” said Kakar.

The scenes were reminiscent of Afghanistan during its brutal civil war in the 1990s, when a patchwork of militias held stretches of key trade routes and extorted truckers and residents using the roads at will.

Hundreds of trucks were lined up Wednesday (28) on the Pakistan side of the border, waiting for permission to cross.

On a dusty plain, with rugged hillocks as the backdrop, drivers and “spanner boy” apprentices tinkered with their vehicles ahead of the journey.

While the distance is just 100 kilometres (60 miles), the journey is fraught with danger.

Vehicles and roads are poorly maintained in Afghanistan, police and army checkpoints routinely demand “tea money” or more from every driver, and bandits also lie in wait – either to steal goods or demand further payment for safe passage.

There is also the risk they could be caught in the crossfire during fighting between the Taliban and government forces.

Still, traders and drivers say they have few options but to keep on trucking.

“War has been going on, we know that, but we don’t have any other choice,” said Abdul Razzaq, a driver carrying hatchling chicks to Kandahar.

“Transportation of goods is the only means for us to feed our families,” he said.