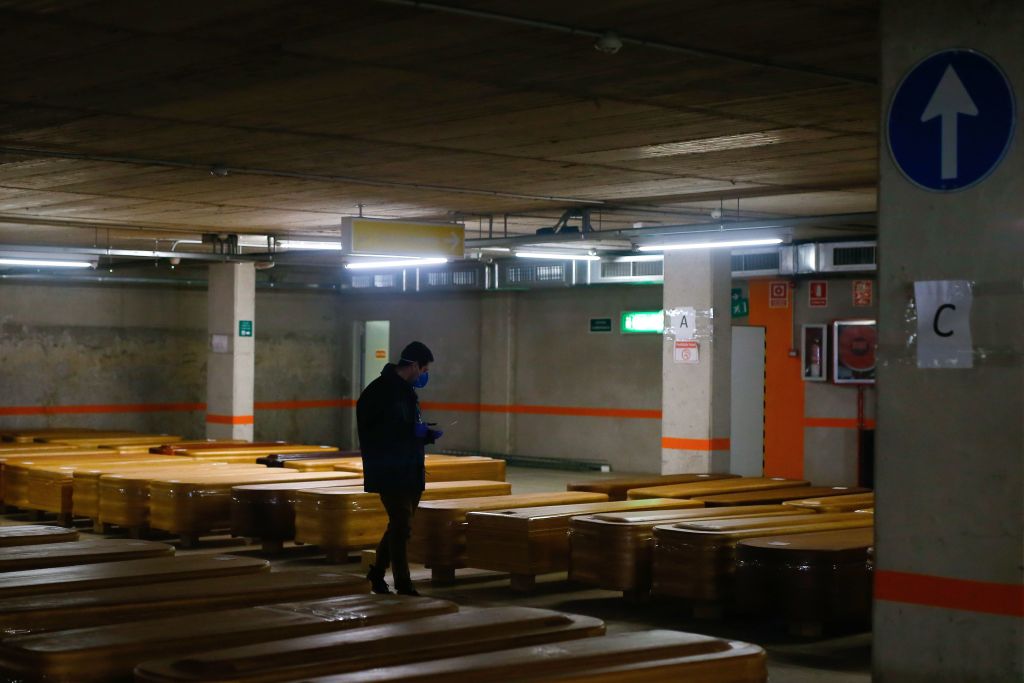 A mortuary worker wearing a face mask and gloves checks coffins, most of them containing the bodies of COVID-19 victims, at the parking of the Collserola funeral parlour in Montcada i Reixac, near Barcelona, on April 3, 2020. – More than 900 people died in Spain over the past 24 hours for the second day running, government figures showed, although the rate of new infections and deaths continued to slow. (Photo by PAU BARRENA / AFP) (Photo by PAU BARRENA/AFP via Getty Images)

Deaths from the global coronavirus epidemic accelerated again on Friday (3) as the US, Spain and Britain grappled with their highest tolls yet and the world economy took a massive hit.

With more than 53,000 dead, the threat has never been more stark. Experts warn that the more than one million cases of COVID-19 confirmed globally are probably just a small proportion of total infections, as testing is not widely available.

Prosperous countries in Europe and North America are currently bearing the brunt of the disease but — with infections also reported in war zones and refugee camps — there are fears of a new explosion among the world’s most vulnerable.

“The worst is yet to come,” UN Secretary-General Antonio Guterres said, referring to countries beset with fighting like Syria, Libya and Yemen. “The COVID-19 storm is now coming to all these theatres of conflict.”

For the moment, the United States accounts for around a quarter of confirmed cases, but Europe is far from being out of danger — Spain reported more than 900 deaths in 24 hours on Friday, for the second day running.

While Italy still leads the world in fatalities, France, Belgium and Britain have also been hard hit. The UK government opened a 4,000-bed field hospital on Friday ahead announcing a its highest one-day toll of 684.

UK prime minister Boris Johnson is himself entering a second week of isolation with a high temperature after testing positive for the virus, but Queen Elizabeth is to make an historic address to Britain and the Commonwealth nations on Sunday.

The public health battle being waged across the world ebbed and flowed, with Germany saying the rate of new infections is slowing but once confident Singapore closing schools and workplaces to fend off a possible renewed upsurge in cases.

The virus has now killed more than 10,000 people across Spain, but it spared 29-year-old Javier Lara, who has returned home after being treated in an overburdened intensive care unit and told of his suffering.

“I was panicking that my daughter would get infected. When I started showing symptoms, I said I wouldn’t hold her or go near her,” he said, describing facing death with an eight-week-old as the “worst moment in his life”.

The world economy has been pummelled by the virus and the associated lockdowns, with more than half the population of the planet under some kind of stay-at-home order.

The US economy shed 701,000 jobs last month, its worst since March 2009 in the wake of the global financial crisis, boosting the jobless rate to 4.4 percent for the first time in 45 years.

Things were no better in Europe, where analysts from IHS Markit warned that business activity in the 19-nation eurozone had suffered its worst crunch ever recorded, and the central bank of eurozone member Ireland said its output could be slashed by 8.3 percent this year.

Financial ratings agency Fitch predicted both the US and eurozone economies would shrink this quarter by up to 30 per cent and the Asian Development Bank warned on Friday the global economy could take a $4.1 trillion hit — equivalent to five percent of worldwide output.

China’s central bank became the latest to announce special stimulus measures Friday when it cut reserve requirements for smaller banks in order to release around 400 billion yuan ($56 billion) in liquidity.

The outbreak began last year in China, which announced a day of national mourning on Saturday for those who died fighting against the disease. Fourteen deceased frontline workers will be celebrated as “martyrs” of the epidemic.

In India, where more than one billion people are under lockdown, prime minister Narendra Modi called on Indians to hold candles and mobile phones aloft for nine minutes on Sunday to dispel the “darkness and uncertainty” of the pandemic.

In the megacity of Mumbai, police barricaded off parts of Dharavi, one of Asia’s biggest slums, made world famous by the 2008 film “Slumdog Millionaire”.

“We sprayed hydrochloric acid to disinfect these buildings and nearby areas as well,” said Vijay Khabale-Patil of Mumbai’s city authority.

Mobinuddin Shaikh, 51, who lives opposite a coronavirus patient, said: “We are a family of five. We use communal toilets or have to get water from public taps. Only God can save us.”

Even in the world’s richest country, the US, healthcare providers are under pressure. New Yorkers like COVID-19 survivor Diana Berrent are donating blood plasma in the hope their hard-won antibodies can be used to treat future victims.

“We can be superheroes,” the 45-year-old photographer said. “These are unprecedented, frightening times where everything is beyond our control — except we as survivors can help.”

The virus has chiefly killed the elderly and those with pre-existing medical conditions, but recent cases of deaths among teenagers and babies have highlighted the dangers for people of all ages.

In Kenya, the health ministry said a six-year-old boy had died and in Spain, mothers like 34-year-old Vanesa Muro who gave birth with COVID-19 are warned not to touch their newborns without wearing gloves and masks.

“It’s hard,” she said at her home in Madrid. “He grabs your finger, the poor little thing and holds on to the plastic, not on to you.”

Meanwhile, in northeast Nigeria, aid workers say the virus could rampage through camps for 1.8 million people displaced by a decade-long Boko Haram insurgency.

“It will spread like wildfire and affect all involved,” said one UN worker. “It is really scary.”