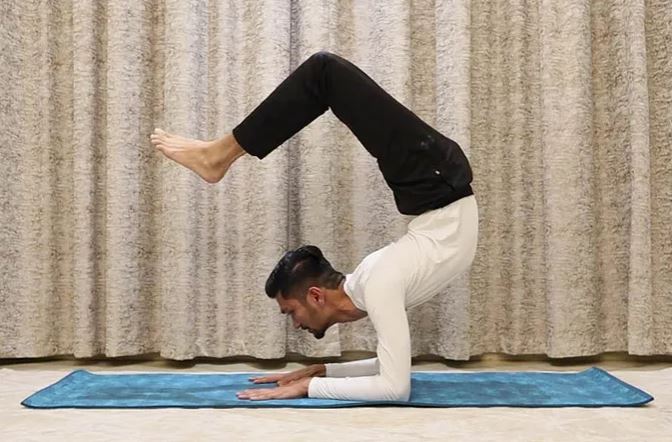 ​A Dubai-based Indian yoga teacher has created the Guinness World Record for holding a yoga pose for 30 minutes, according to media reports.

According to the Guinness Worlds Records, the yoga teacher, who started his yoga journey at the age of eight, prepared for two years before attempting to create the record. It added that he used the extra time spent at home during Covid-19 lockdown to hone his skills.

The 21-year-old shattered the previous record of four minutes and 47 seconds, Guinness Worlds Records captioned the video posted on Instagram on International Yoga Day on Tuesday (21)

The vrschikasana comes under advance yoga and requires a person to place their forearms on the ground and arch legs over the head.

“The scorpion position is all about stability. The longer you hold the pose, the better you learn to establish your mental resilience,” said Moradiya. “I was not feeling my toes, and my hip and back numbed before feeling so much pain throughout,” he added.

In the statement, Guinness Worlds Records said that Moradiya made the attempt on February 22 this year, which makes it unique. When written in the widely-used date format, it appears as 2/22/22, which is a palindrome.

Moradiya started practicing yoga regularly from 2010 and even forayed into Power Yoga.  He also practiced forearm stand exercise and even walked on a treadmill using his arms to increase shoulder and back flexibility.

In 2017, he completed his yoga teacher training course and chose yoga as his career, to help people cope with their health issues and to achieve their fitness goals.

Moradiya believes that people who do yoga are more likely to have a positive image of their own physical and mental health, including a stronger sense of mental clarity, physical fitness, flexibility, and strength.

According to him, the essence of yoga is balance – not just balance within the body or that between the mind and the body, but also balance in the human relationship with the world.

“Something I learn through my career is that everyone could use more yoga in their lives,” he said.