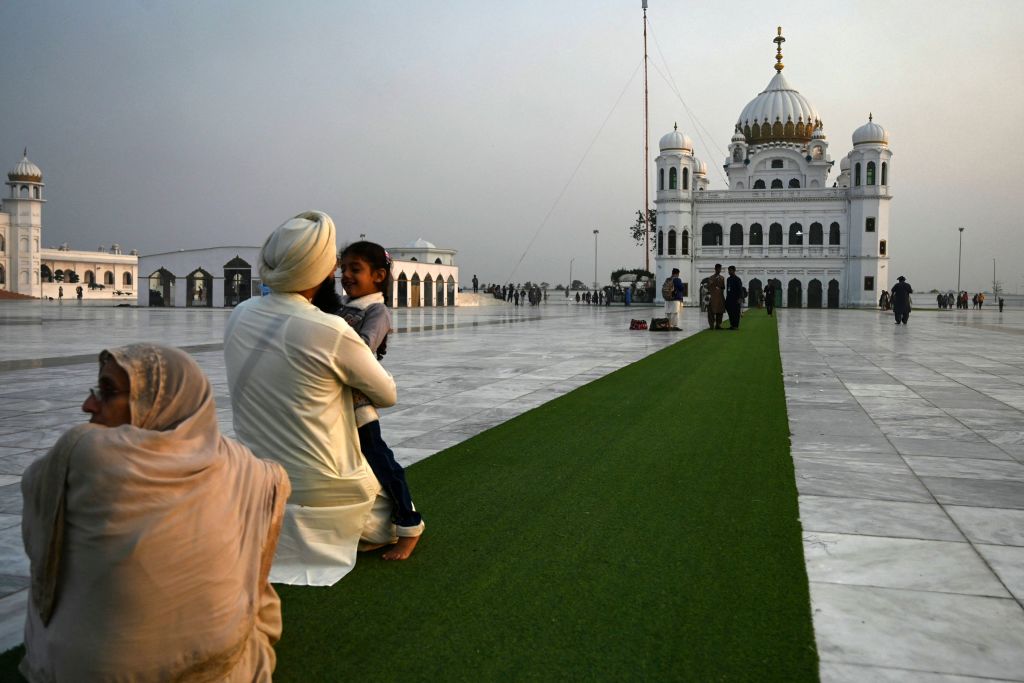 Sikh pilgrims arrive to take part in a religious ritual on the occasion of the birth anniversary of Guru Nanak, founder of Sikhism, at the Gurdwara Darbar Sahib in Kartarpur near the India-Pakistan border on November 18, 2021. (Photo by AAMIR QURESHI/AFP via Getty Images)

PUNJABI LEHR, the Pakistan-based YouTube channel that brought together two brothers separated by the partition of India, has reunited more than 200 friends and families across the border.

A video of the tearful reunion, showing the elderly brothers – one from India and another from Pakistan – hugging each other at the visa-free Kartarpur Corridor this week, has gone viral.

The emotional meeting of 84-year-old Saddique Khan from Pakistan’s Punjab and his brother from Indian Punjab, Habib alias Sikka Khan, lasted more than an hour before the brothers returned to their homes.

The reunion of the two octogenarians separated during the partition in 1947 also put a spotlight on the YouTube channel.

Nasir Dhillon, who runs the channel with over 531,000 subscribers, says its aim is “to bridge the gap between the peoples of East and West Punjab, created by the partition.”

“With the help of the people of both sides of Punjab, we have reunited over 200 friends and families across the border,” Dhillon, 37, said.

“People from both sides of the border share their stories of separation from their immediate family members, relatives and friends during bloody riots of partition in 1947, and some link is found through such videos (stories) that help find their loved ones, friends and their ancestral houses,” said Dhillon, who runs the channel with Bhupinder Singh Lovely of Nankana Sahib.

Dhillon, from Faisalabad, who served as a police officer for 12 years in Punjab police, started his YouTube channel about four years ago.

He said his grandfather gave him the motivation to start the channel to help reunite the families and friends and promote love among the people across the border.

“My grandfather was from the Indian Punjab village of Karan Taran Panjwar. He would tell me stories of the partition that kindled my interest in doing something related to reuniting the people across the border,” he said.

“My grandfather and my father had a desire to visit the village but unfortunately they left the world without having this desire fulfilled,” he said.

Dhillon, a father of three who is in the real estate business, said he too wants to visit his ancestral village if the Indian government provides him a visa.

Uploading a clip of Saddique Khan of Faisalabad – 130 km from Lahore – some two years ago on the channel helped trace his younger brother on the other side of Punjab.

Saddique who was 10 years old in 1947, tried to recollect his memories related to his family. The younger Sikka was one-and-a-half years old at that time.

“My mother, young Habib who was in her lap and younger sister were at my grandparents’ house when the riots broke out. My father and I left for Pakistan in a chaotic situation. On the way my father was killed,” Dhillon quoted Saddique as having said.

Dhillon said when he uploaded the interview of Saddique talking about his lost brother about two years ago, a doctor from Canada contacted him and informed him he belonged to Phulewal village of Indian Punjab and helped trace Sikka.

“Both brothers then were connected by WhatsApp video call and talked hours about their family,” Dhillon said.

Sikka told Saddique their mother committed suicide by jumping into a canal as she had developed a mental disorder after losing her husband, son and some other relatives.

Their sister also died a few years after the partition, he said.

Saddique was brought up by his uncle while Sikka was taken care of by a Sikh family. Saddique got married and had children and grandchildren while Sikka remained single, he said.

“Since Sikka did not have a passport and to get an Indian visa for Saddique was not easy, it was decided that the former should reach Kartarpur Sahib using the corridor which does not require a visa,” Dhillon said.

He said both brothers might have been united more than a year ago at the corridor if the restrictions had not been imposed by India due to Covid-19.

Saddique has appealed to Pakistan prime minister Imran Khan to help his brother get a visa for a longer period so that he could travel to Pakistan and live with him, he said.

“Now both brothers talk over the phone and may meet again using the corridor,” he said, urging the Indian and Pakistan governments to allow senior citizens to have visa-free travel into each other’s side.

Dhillon also talked about a number of stories of Indian Sikhs who visited their ancestral residences in Pakistan’s Punjab province in recent times.

In November 2019, the Pakistan prime minister formally inaugurated the Kartarpur Corridor as part of the commemoration of the 550th birth anniversary of Guru Nanak.