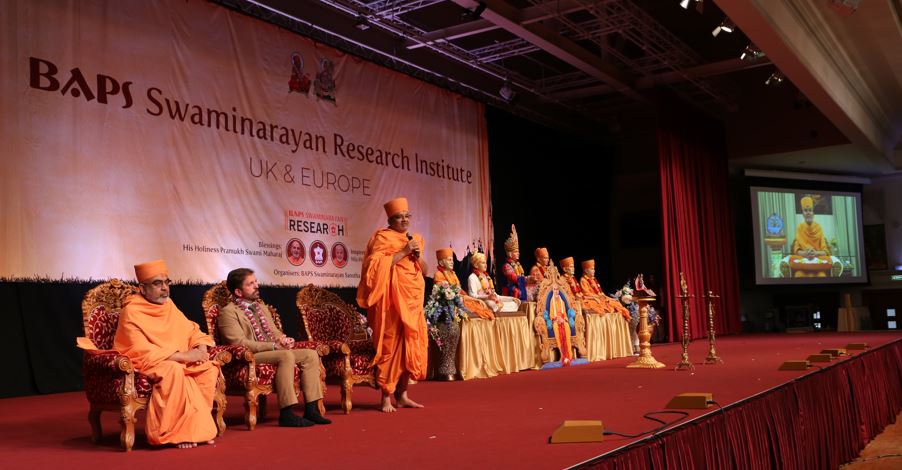 A new research institute was inaugurated on Sunday (29) at BAPS Shri Swaminarayan Mandir in London, popularly known as Neasden Temple, a statement said.

His Holiness Mahant Swami Maharaj inaugurated the BAPS Swaminarayan Research Institute via video link from India by lighting a lamp, which was simultaneously lit by members of the congregation in London.

The world’s leading scholar of Indian philosophy Mahamahopadhyay Bhadreshdas Swami and Professor James Hegarty, of Cardiff University, were also present. It was part of the celebrations marking the birth centenary of His Holiness Pramukh Swami Maharaj.

It is the first such centre of learning and research of Indian languages and Hindu texts to open outside of India, the statement added.

Mahant Swami Maharaj said: “Yogiji Maharaj had envisioned such an institute and was passionate about youths learning and discoursing in Sanskrit. The Research Institute has fulfilled this vision. May students excel in their studies and work together to serve society, expanding the circle of unity across the world.”

Mahamahopadhyay Bhadreshdas Swami, the author of the Swaminarayan-Bhashyam and Swaminarayan-Siddhanta-Sudha, delivered the ‘first lecture of the Institute’ by reinforcing His Holiness Mahant Swami Maharaj’s messages of global harmony, public service and academic excellence. He also urged parents to encourage their children in arts.

Professor Hegarty, said: “I am incredibly honoured to stand before you today. The young people [who sang and recited in Sanskrit] are extraordinary! I cannot believe what I have seen and heard. I offer my deepest respect and thanks to His Holiness Mahant Swami Maharaj.”

He added, “The new research centre will soon flourish here in the UK and Europe – and globally – under the sure and skilled guidance of the swamis assembled here today. Research and teaching based on research, if they are themselves based on true and compassionate mastery, can make a difference in the world. The new Research Institute we inaugurate today will show that. I have no doubt at all.”

He also cited a Sanskrit verse from the Satsang Diksha text, authored by Mahant Swami Maharaj, praying for unity, friendship, compassion, tolerance and love to flourish among all people of the world.

The event started with a devotional song by children of BAPS Swaminarayan Sanstha from around the UK and Europe. It continued with Vedic peace prayers by a choir of 40 children and a recital of Sanskrit verses, including 10-year-old Maharshi Shah of Coventry.

Thousands participated in the event both online and in-person at Neasden Temple.

According to the statement, the Institute will strive to foster social harmony, interfaith dialogue, public engagement and academic discourse through its rigorous teaching of Sanskrit, classical Vedic literature and Hindu beliefs, values and practices – all in a traditional Gurukul style.