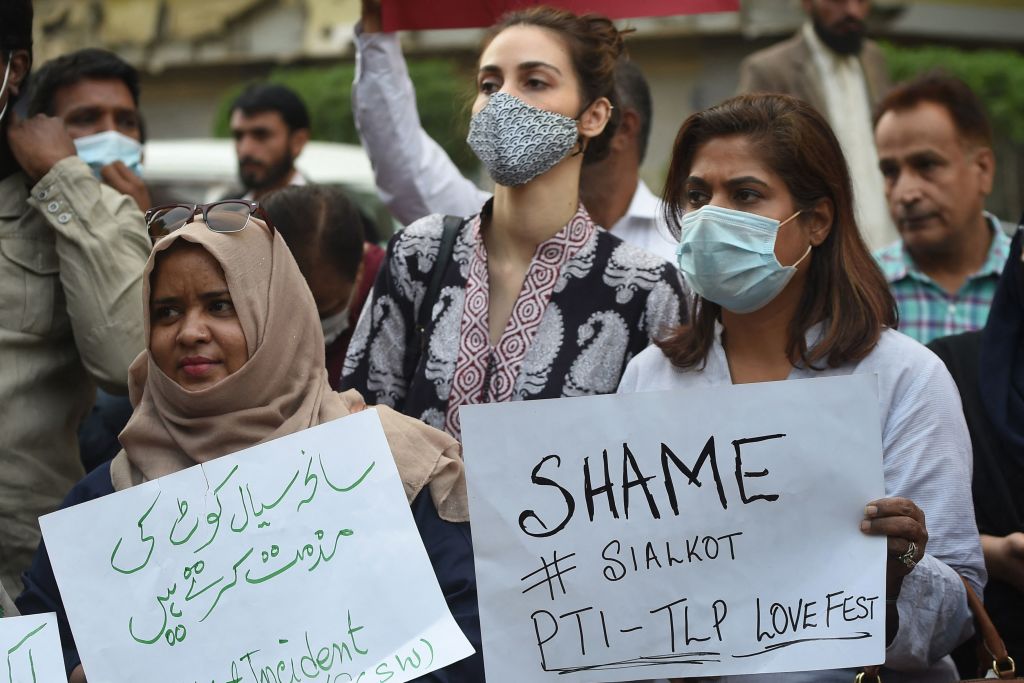 Members of the Joint Action Committee carry placards during a protest in Karachi on December 4, 2021 against the killing of a Sri Lankan factory manager in Sialkot. He was beaten to death and set ablaze by a mob who accused him of blasphemy, officials said. (Photo by RIZWAN TABASSUM/AFP via Getty Images)

FAMILY members of Sri Lankan national Priyantha Kumara Diyawadana, who was lynched by a mob in Pakistan over allegations of blasphemy, is waiting for his remains to be flown to Colombo on Monday (6).

On Friday (4), supporters of the Islamist party Tehreek-e-Labbaik Pakistan (TLP) attacked a garment factory in Sialkot in Pakistan and lynched its general manager Diyawadana, 49, before setting his body on fire over allegations of blasphemy.

“I am waiting for his remains to pay my final respects to him,” his wife Nilushi Dissanayake told reporters.

According to the post-mortem report, nearly all bones of Diyawadana were broken and his body was 99 per cent burnt in the lynching incident.

Nilushi said Diyawadana had gone to Pakistan in 2011 after he got a job as a mechanical engineer at an apparel factory in Faisalabad. After a year, he joined Sialkot’s Rajco Industries as its general manager and was the only Sri Lankan national working in the factory.

The couple has two sons aged 14 and 9 and they haven’t seen their father since 2019 as he was unable to visit his country due to the Covid pandemic.

The elder son said he spoke to his father over the phone on Thursday (4) night and they were looking forward to his home visit next year.

Diyawadana’s elder brother Kamalasiri was also previously working in Pakistan. They were staying at a distance of 250 km from each other but were in touch. He said he was not aware if his brother had faced any threat in Pakistan.

Diyawadana was born in 1972. He graduated from Peradeniya University in Kandy in 2002 and was employed in the island’s private sector before his job in Pakistan.

Sri Lankan parliament and prime minister Mahinda Rajapaksa on Saturday (5) condemned the lynching and hoped that his Pakistan counterpart Imran Khan will keep his commitment to bring all those involved to justice. The incident sparked widespread condemnation in both Pakistan and Sri Lanka.

Police were also chided for reaching the crime scene after the incident. Only a couple of policemen can be seen in one video asking the people to stay back while the body was burning.

As pressure mounted on the Pakistan government to bring the guilty to justice, over 800 people have been booked under terrorism charges while 13 prime suspects are among 118 arrested.

Mob killings over allegations of blasphemy have been common in Pakistan, where the crime can carry the death sentence.

In April 2017, an angry mob lynched university student Mashal Khan when he was accused of posting blasphemous content online.

A Christian couple was lynched and then set ablaze in a kiln in Punjab in 2014 after being accused of desecrating the Quran.